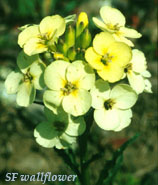 If you are unable to travel to southern California to enjoy the early season, what might you see in December and January right here in the Bay Area? In our region, most of the germinating seeds are actually annual non-native invasive weeds. The slower-growing native perennials have a competitive disadvantage of becoming established from seed. Most of the spring bloomers here are long-lived perennials which die down to the roots in the dry season and revive with the rains.

To a knowing eye, a gardener’s eye, the awakening of the earth after the first autumn rains is one of the most enjoyable times of the year, offering an excitement that holds its own against the full efflorescence of spring. After the early “germinating” rains, look for Polypodium ferns, and spot the first green leaves of native bunchgrasses, the bold wavy leaves of soap plant (Chlorogalum pomeridianum), and the foliage of aster, gum plant (Grindelia spp.), Douglas and coast iris, checkerbloom (Sidalcea), and many others, which are usually leafing out by Christmas time.

Sun-warmed south-facing slopes are where to look for early wildflowers. The same species of plant may flower a month or two later on the cool north faces. Harbingers of spring on warm slopes are the well-named footsteps-of-spring (Sanicula arctopoides), lace parsnip and bladder parsley (Lomatium dasycarpum, L. caruifolium), miniature star lilies (Zigadenus fremontii – only on Bernal), and buttercups (Ranunculus californicus). You can’t beat San Bruno Mountain’s Summit Trail for a profusion of all the early spring bloomers, which include rock cress (Arabis blepharophylla), San Francisco wallflower (Erysimum franciscanum), miner’s lettuce (Claytonia perfoliata), and many others. 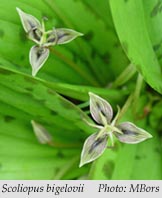 Foetic Adder’s TongueMontara Mountain is dominated by shrubs, and they put on a subtly beautiful show in winter and early spring. The creation of the Hazelnut Trail many years ago breached the shrub community, and native wildflowers moved into the narrow opening in the shrub layer. This is home to the beautiful little foetid adder’s tongue or slinkpod (Scoliopus bigelovii) and other early-blooming species. You can visit this trail on Randy Zebell’s chapter field trip in February. Edgewood Park in San Mateo County offers hard-to-find early-flowerers, such as hound’s tongue (Cynoglossum grande), leatherwood (Dirca occidentalis-but you’ll have to look hard for this rarity), and silk tassel (Garrya elliptica). A February CNPS Santa Clara Valley Chapter field trip (http://www.cnps-scv.org) would give you the best assurance of locating these plants. Muir Woods is a delightful nearby treasure of a redwood forest habitat, where you can see early-blooming understory plants such as milk maids (Cardamine californica), as well as a plethora of winter-rich ferns.

Those who are local-bound and confined to public transportation have access to one of the richest examples of a wide variety of early-blooming native plants. San Francisco Botanical Garden’s Arthur Menzies Garden of California Native Plants is a veritable cornucopia, where you can see pink flowering currant, silk tassel, manzanitas, ceanothus, and many other plants, in naturalistic gardens that are easily accessible and displayed for your pleasure.

Don’t hibernate! Discover a new perspective on the “wildflower season” and a new affinity with nature’s wonderful processes of rebirth.