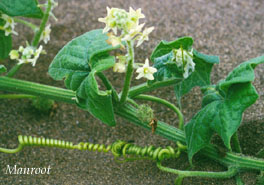 “So Moses brought Israel from the Red Sea…and when they came to Marah, they could not drink the waters of Marah, for they were bitter; and therefore the name of it was called Marah.”-Exodus 15:22

Many people refer to plants of the genus Marah as manroot, a suitable name. I have always preferred the name wild cucumber because of its obvious relationship to the family that gives us our cucumbers, melons, squashes, pumpkins, gourds, and chayotes. There are five species of Marah in California, the most widespread being California cucumber or manroot, M. fabaceus. This is one of the earliest plants to start growth after the first rains. Its survival depends on this early start while water is available. Growth is exceedingly rapid and you can measure it day-to-day –you can almost see it grow. Wild cucumber needs to do this so that it can climb (by sensitive tendrils) to overtop shrubs and other plants and spread out its blanket of foliage to absorb the sun’s rays. The plant is more than 99% water; break a growing stem and watch the water leak out. Water seems to be its only limiting factor; after the rains stop it goes dormant. Summer drought is seemingly what keeps it in balance in nature. In copiously-watered Golden Gate Park, for example, Marah can be an evergreen pest, smothering shrubs and small trees under blankets of foliage.

This blanket of foliage traps a lot of energy from the sun. Where does the energy go? Into the root, which in this case is a large tuber, a very large tuber. The tubers on older manroots can exceed a large man’s size. Sometimes the tuber will divide, appearing to have legs. A specimen tuber of M. macrocarpus of unknown age dug at Rancho Santa Ana Botanic Garden (RSABG) stood for many years at the entrance to the Administration Building there. It had been transported on a flatbed truck, was several feet in diameter, and weighed 467 pounds, excluding several basal tubers left in the ground.

While I was a gardener in Golden Gate Park, there was an unwanted plant growing beside my toolbox. I continually pulled up its new shoots, attempting to starve the root. It showed no signs of giving up after five-and-a-half years so I decided to dig it up. Although not a rival for the RSABG tuber, it was big enough-about three feet long and one foot diameter. Being deprived of ability to photosynthesize during that period had had no apparent effect on it. It was firm of flesh and sound in every fiber. Good thing I decided to take that shortcut, otherwise it would have outlasted me.

Plants in San Francisco are California manroot, Marah fabaceus, except for a single plant of the coast manroot, M. oreganus, off Sunnydale Avenue in McLaren Park. Coast manroot is plentiful on San Bruno Mountain and Montara Mountain. The name Marah suits it; all parts are exceedingly bitter; touch your tongue to a cut root and your jaw will lock. This strong a chemical defense indicates potential medicinal use. The cucumber family (Cucurbitaceae) in California-which includes five species of Marah, as well as the desert members Brandegea and the gourds (coyote melon and calabazilla in the genus Cucurbita)-was a pharmacopoeia, a veritable drugstore for native people. Roots were used as a purgative, as were seeds. Stroughton’s Bitters, a laxative, was made from California manroot. Natives threw crushed root into waterbodies to stun fish and used its seed oil for a variety of purposes. I am unsure what wildlife make use of this plant, except that rodents and scrub jays cache its seeds. You can be sure that there are creatures which have found a use for such a common and widespread plant.

A note on the derivation of its scientific name: Munz in his Flora of California incorrectly states that Marah was from an aboriginal name. Another biblical citation is Ruth 1:20: “Call me not Naomi, call me Mara, for the Almighty has dealt bitterly with me.” Other sources say it is Latin, but perhaps the Romans used the biblical reference for the origin of their word for bitter?