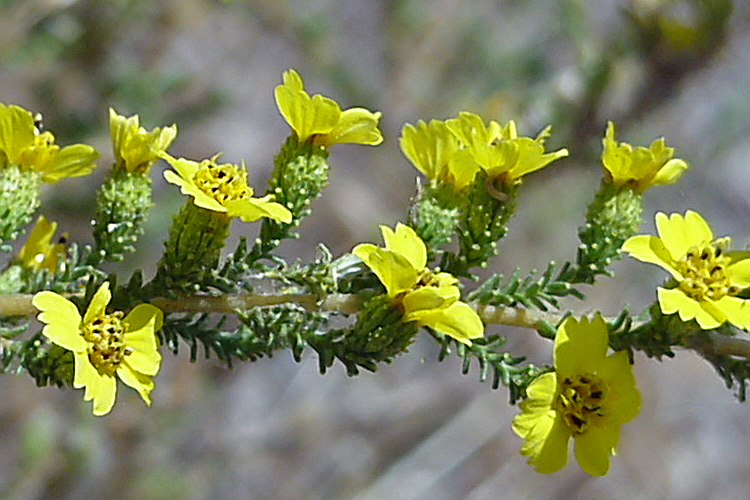 If you’ve walked through any of the Bay Area’s grasslands in the summer, you’ve no doubt notice patches of dainty daisies with small white or yellow blossoms. Pleasing to the eye, you’ve also no doubt had another of your senses tickled by these plants. That turpentine odor that you pick up on your boots or pant legs and notice when you get back in your car can mean only one thing… you’ve wandered through a field of tarweeds.

Belonging to the sunflower family (Asteraceae), the so-called tarweeds are assigned to the tribe Heliantheae and the subtribe Madiinae. There are some 127 species of tarweeds in 17 genera with a center of diversity occurring in California and Hawaii. Also known as tarplant and rosinweed, the tarweeds are notable for the presence of glands on the leaves, stems, and involucres (bracts surrounding the inflorescence) that exude a sticky, strong-smelling resin. Our native California tarweeds belong to the genera Anisocarpus, Blepharizonia, Calycadenia, Carlquistia, Centromadia, Deinandra, Harmonia, Hemizonella, Hemizonia, Holocarpha, Jensia, Kyhosia, Layia, and Madia. Other members of the subtribe but not commonly called tarweeds are blow-wives (Achyrachaena), eyelashweed (Blepharipappus) whitecrown, (Holozonia), and hareleaf (Lagophylla).

But back to the tarweeds. Until Dr. Bruce Baldwin published his ground-breaking work on the group and reassessed the taxonomy of the species, the tarweeds were pretty much divided up between two genera, Madia and Hemizonia. A California Flora and Supplement (Munz 1968) lists 18 species and five subspecies of Madia and 27 species and six subspecies of Hemizonia. Of course, that has all changed now. The genera Hemizonia and Madia still exists (thank goodness), but some members are now assigned to some of those unfamiliar genera listed above.

The tarweeds are mostly annual herbs with the aforementioned aromatic herbage. The group of plants formerly lumped under the genus Hemizonia also includes one perennial shrub species. Several members have spine-tipped leaves and involucres. These species have the well-deserved common name of spikeweed, which is readily apparent to anyone that has ever tried to collect specimens. Our local Hemizonia and Madia species (and their derivatives) are mostly summer-flowering denizens of grasslands and fields. The spikeweeds, more common in low-lying alkaline flats around the edge of the bay, flower late summer and into the early fall, while the layias are mostly spring-flowering. Long after the non-native annual grasses have turned brown and the other flowering herbs have dried up and blown away, the tarweeds can put on quite a show.
With relatively deep roots and small leaves, tarweeds are able to tap moisture held deep in the clayey soils and to limit water loss during the heat of the day, making these summer-flowering plants well adapted to growing long after the last rains have fallen. By flowering as late in the season as they do, they are almost the only game in town for such pollinators as native bees. And although they might be the only green plant in the field, they tend to be avoided by grazing cattle because of the accumulation of the pungent resin on their leaf surfaces. In fact, by late summer, few animals can forage on tarweeds.

Many tarweeds produce copious amounts of seed and they were a staple of many Native American tribes. Seeds were collected and ground into pinole or meal, which was eaten dry. Seeds and roots of tarweeds were also stored and consumed through the year. The seeds are also consumed by a wide variety of birds and small mammals.

In addition to being pretty and at least to some, pleasant-smelling, many of the tarweeds have very limited distributions. In California, the group includes 11 species that are federally and/or State-listed as Endangered, Threatened or Rare, 32 species that are on the CNPS list 1B, one on List 3 and seven on List 4.

In San Francisco, only five tarweeds can still be found, but only is common. Coast tarweed (Madia sativa, which includes what was formerly known as M. capitata) grows abundantly in the grasslands of Bayview Hill, Corona Heights, Glen Canyon, along O’Shaughnessey Boulevard, and in the Presidio. Little tarweed (Hemizonella minima; formerly Madia m.) is known only from McLaren Park. Hayfield tarweed (Hemizonia congesta ssp. luzulifolia) has been found growing in coastal prairie near the Log Cabin in the Presidio. Ten plants were counted in 2002, but they have not been observed there for at least four years. Tall tidy-tips (Layia hieracioides) and tidy-tips (Layia platyglossa) are both known only from the Presidio. With the exception of coast tarweed, each of these species will be included on our chapter’s revised list of locally significant plants.

So this summer, when you’re out hiking in the grassy hills of the Bay Area, remember to follow your nose as well as your eyes. And when you pick up that strong odor of turpentine, look for the source. You’re likely to be rewarded by spying some very pretty native heerbs that you might otherwise have overlooked.