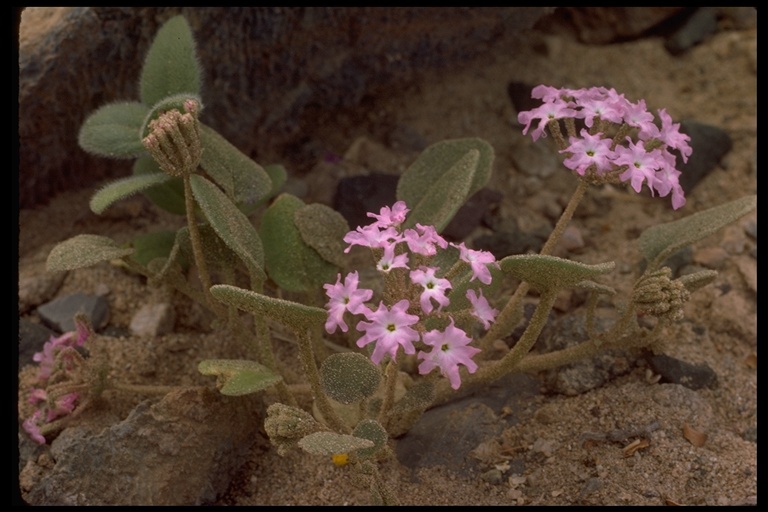 This past September I had the extreme good fortune of being invited to assist with a mapping effort of the coastal dune vegetation south of Pismo Beach, San Luis Obispo County. As a student at Cal Poly SLO, I spent a fair amount of time exploring the dunes and working on several projects in the dune complex there, which extends to the mouth of the Santa Maria River and northern Santa Barbara County. But it has been many years since I’ve gotten to spend any time surveying the area and I’d forgotten how utterly fascinating the vegetation is. It provided the motivation for this newsletter’s subject, the sand verbenas.

If you’ve followed this column over the years, you may recall I’ve covered numerous dune species and even dedicated one issue to coastal dune scrub (June 2003, vol.17 no.2). The amazingly dynamic coastal dune ecosystem can be broken up into three major ecological zones: strand, open dune pioneer community, and stabilized dunes. The strand zone is a narrow to wide band of unvegetated beach subject to the tidal action, if only episodic extreme high tides and storm surges. Inland from there is the open dune pioneer community, which consists of a complex of vegetated foredunes, dune slacks or hollows (which, surprisingly, may support oasis-like wetlands), and deflation areas supporting dune plains and shifting open dunes. Further inland are the stabilized dunes which may support scrub or, further north, forest communities.

Although found along the entire Pacific Coast of North America, the coastal dunes of Southern California have been mostly lost to development and shoreline modifications. Still, excellent examples of coastal dune habitats can be found in Santa Barbara County between Point Sal and Point Arguello, on the Nipomo-Oceano-Guadalupe dune complex of southern San Luis Obispo County, along Monterey Bay in northern Monterey County and southern Santa Cruz County, the Point Reyes Peninsula in Marin County, Bodega Peninsula in Southern Sonoma County, Manchester and Ten Mile dunes in Mendocino County, Humboldt Bay dunes in Humboldt County, and the Lake Earl dunes in Del Norte County. There are extensive dune systems along some 225 kilometers of Oregon’s coastline, and north into Washington and Vancouver Island, British Columbia. And, of course, there are the restored dunes of the Presidio at Lobos Creek, Baker Beach and Crissy Field. Historically, coastal dunes once covered all of the western San Francisco districts of the Sunset and Richmond, much of the Presidio, and Golden Gate Park. The last remaining stretch of dunes was graded in 1954.

The foredune zone is a harsh environment, subjected to strong winds, salt spray, blowing sand and a constantly shifting substrate. Characterized by hummocks of low-growing plants, the foredunes are likely to be dominated by the native species yellow sand verbena (Abronia latifolia) and beach-bur (Ambrosia chamissonis) and the non-native species sea rocket (Cakile maritima) and European beach grass (Ammophila arenaria). A piece of driftwood may be all that is needed to create a sheltered spot for a seed to take root and it’s all a plant can do to stay on top of the accumulating sand. The pioneer species of the foredunes are usually prostrate herbaceous perennial species with deep roots, although these are replaced by perennial grasses on dunes of northern latitudes.

The sand verbenas belong to the four-o’clock family (Nyctaginaceae), a collection of some 350 species of mostly herbs and shrubs in 30 genera. Found on five continents, the family is best represented in tropical and subtropical regions. The family includes the flowering vine Bougainvillea, a native of South America, widely planted for its brilliantly colored papery flower bracts. California hosts seven native genera, including the family’s namesake Mirabilis.

Yellow sand verbena is a fleshy, deep-rooted perennial which forms dense mats about 6 feet around. The impressive root systems can extend 15 feet or more. The fleshy, glandular leaves and finely glandular-hairy stems seem always to be covered with sand grains. Plants produce a profusion of rounded clusters of yellow tubular flowers from May through October. The type specimen was named based on a collection made by Eschscholtz in 1824. It is native to our northern shores and is still found at Sharp Park, Fort Funston, Ocean Beach and the “Sutro dunes”, Baker Beach, and Land’s End, as well as along the sandy edge of the tidal marsh at Crissy Field; its persistence has been tremendously aided by the dune restoration efforts at the Presidio. Yellow sand verbena was described as one of the primary pioneer plants that typified San Francisco’s historic dunes (Ramalay 1918, Wagstaff 1962).

Pink sand verbena is a glabrous to glandular-hairy annual which forms prostrate mats about 3 feet across. It too produces a profusion of rounded inflorescences only of green to magenta blossoms; flowering occurs from June through September. This species could be confused with the other reddish-flowering species, red sand verbena, but can be distinguished by its thinner, ovate to diamond-shaped leaf blades. The type specimen of this species was first collected at Monterey in 1786 by members of the La Perouse Expedition and was the first California plant that was new to science. Although also native to the San Francisco Peninsula, pink sand verbena is uncommon. I could not determine if it was ever more widely distributed here. In 1891, Katherine Brandegee described it as occurring only at Brandegee (1891) and Howell, et al. (1958) described it as rare on sandy beaches, listing collections made at Crissy Field and the Presidio.

Like yellow sand verbena, red sand verbena is a fleshy, glandular-hairy perennial. And like the others, it forms prostrate mats on loose sand. Flowers are wine-red, appearing February through October. Red sand verbena is not regarded as naturally occurring north of San Luis Obispo County, although it has turned up in Mendocino and Marin counties and the restoration project at Crissy Field.

Of the coastal sand verbenas, two are listed by the California Native Plant Society as rare. Pink sand verbena (A.umbellata var. breviflora) is a List 1B.1 taxon and red sand verbena is a List 4.2 taxon. Neither of these is believed to occur in our chapter area. Although yellow sand verbena and the other variety of pink sand verbena (A.u.var. umbellata) are widely distributed and locally common, their presence here has been quite tenuous, and both are strong candidates for inclusion on our list of locally significant plant species.

Brandegee, T.S. 1891. Catalogue of the Flowering Plants and Ferns Growing Spontaneously in the City of San Francisco. Zoe II 91:334-386.

Wagstaff, F.R. 1962. The Flora of the San Francisco Sand-Dunes, Its Composition and Adaptations.