Take a moment and visually inhale this ‘snapshot in time’ taken by Ansel Adams from the north summit of San Bruno Mountain. A heart-shaped outline composed of Monterey cypress points toward the heart of downtown San Francisco. What divine stroke of genius or madness would possess one to engage in this endeavor? What purpose did it serve, and better yet, how long would it last? Is there a plaque commemorating this valiant deed? None of these questions can, frankly, be answered and, come to think of it, why should they be? Only a late-nineteenth century soul knows the true reason for planting this iconic expression.

The photograph shows the central portion of the saddle and also the bog area where the entrance to the county park exists today. Hidden within the thin line of eucalyptus trees is Guadalupe Road that connected the Outer Mission to the summit via Radio Road, which is visible in the lower left corner. It pre-dates the construction of Guadalupe Canyon Parkway, the four-lane rural highway connecting Daly City and Brisbane. It was constructed to serve as the east-west artery for homes, commercial and office space and at least one school. They were never built, thanks to the San Mateo County Board of Supervisors who voted 3-2 to keep it open space in 1975. In 1979 the State of California acquired 256 acres of the saddle from Visitacion Associates through the sale and donations of land and turned them over to the county to manage as part of San Bruno Mountain State & County Park.

Below center-left is a slightly dark depression which is Colma Creek, just below its headwaters, which is at the tip of the heart. It flowed west down Colma Canyon to Mission Street in Daly City turned south onto El Camino then followed Old Mission Road east through South San Francisco and entered the bay just north of the airport; quite a journey around the mountain. Boats used to travel up Colma Creek to what is now Molloy’s Tavern on Old Mission Road and steelhead trout swam almost to the headwaters to spawn. The creek is visible as a massive concrete culvert running through South City from the Costco on El Camino to South Linden before it resumes as a natural creek bed to the bay.

The open area to the right of Colma Creek is a rare high-elevation fresh water bog. In the early to mid-twentieth century the bog and a portion of the saddle to the right of the heart was grazed by cattle and there is a fence line that marks the northern boundary. Just outside the lower right border of the picture is the aptly-named Dairy Ravine. The bog had survived grazing and even go-kart races by the local kids back in the 50s still managing to be rich in native grasses, sedges and rushes, as witnessed by a local botanist. In just the last 25 years coastal scrub, blackberry and velvet grass have muscled its way into the bog and it is now considered a disturbed wetland. Much of grassy areas is now a monoculture of non-native gorse. Most of the eastern and western portions of the saddle have managed to remain largely native except for large expanses of European annual grasses mixed with patches of native blackberry, needle grass and fescue. This teaches us that without any intervention there is no guarantee to the long-term survival of our natives.

The very faint lines in the grassy area to the right of the heart were made by pickup trucks, most likely by the ranchers tending their herds although it would be foolish to rule out amped-up yahoos riding roughshod over the landscape. There are still remnants of wide paths running straight up the mountain that were made by motorcycle riders over the decades before the creation of the park. The mountain was recreation of a much different nature back in those days and actually burned quite frequently from accidents caused by fireworks. (Kids played more dangerously and creatively outside back then as opposed to today.) Remember that this was before there were endangered species, at least in the lexicon of the time. That would change dramatically in exactly twenty-eight years, and three years after that a little blue butterfly would save the mountain. 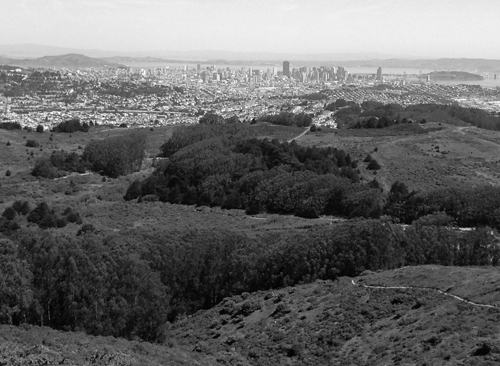 Fast-forward to 2014, seventy years after Adams captured his image of San Bruno Mountain and we see a completely different picture of the bog and saddle. In the absence of grazing, the bog has become a mostly scrub community of willows, coyote brush, coffee berry, poison oak and blackberry. Miraculously there is still a bastion of tough little marsh natives holding on such as creek dogwood, dense sedge, slough sedge, rushes, water parsley, canary grass, false lily-of-the-valley, and tinker’s penny.

There are still remnants of old ponds that were teeming with life and may have supported the Red-legged Frog and its main predator the San Francisco Garter Snake. Even though the ponds are heavily silted from the construction of Guadalupe Canyon Parkway, they still are quite wet and might be able to support those two endangered species if they can be dredged and restored; which is exactly what was proposed by park volunteers who were to be the recipients of a $100,000 mitigation settlement to reconstruct the ponds until the county parks bureaucrats said no. I hold out hope that it still might happen.

As the picture shows, the beautiful heart has turned into a shapeless form of cypress and eucalyptus trees over the past 60 years and the saddle has been infested with gorse. The infestation started in Southern Hills just below the ridge of the saddle – perhaps by some Scot pining for his old friend, the gorse. Whatever the actual source, it’s now the 800-pound gorilla, as it consumed nearly 100 acres before a grant in 2004 removed about 40 acres. There is still active habitat for the Mission Blue and Callippe Silverspot butterflies out on the eastern end.

Thankfully, there is a gritty vigilance present among many people who love and value this mountain, and will do practically anything to insure that it remains as wild as possible. This is a place where we cheer the removal of aggressive, invasive weeds, and are proud to show others how nature rebounds after they are gone. These mountain-lovers volunteer their time to make a difference and, thanks to determined efforts in adaptive management, the result shows that time spent really does make a difference. It takes dedication and determination to ensure that yesterday’s effort becomes tomorrow’s hope. That’s why I love to walk the mountain and invite fellow members and non-members to come with me as I share the stories of the plants and wildlife that make this place so special. I even have a saying, other than the one I always end my journal with, which says, “I hope the mountain bites you because once the mountain bites you… you stay bitten!”

Pictures like these are precious reminders of our past, where we realize that what once was may never be again. How we respect and treat this heritage for future generations determines our worth to our ancestors. Most disturbing to me is to see so many people staring at their smartphones, tapping the screen with their fingers and thumbs, connected to their world by snow-white buds in their ears, completely disconnected from their immediate environment. They never take the time to notice the sweet smell of California lilac in the spring or late-summer coyote brush in the air. They miss the melodic sound of the Swainson’s Thrush or Black-headed Grosbeak singing, or they fail to revel in the sight of wind-whipped fog cascading over the summit.

Perhaps it is best said this way:

“Each succeeding generation accepts less and less of the real thing because it has no way of knowing what has been lost… each generation doesn’t know what it’s missing – it’s as though eagle and osprey were never present.” – Michael Frome, Regreening the National Parks, 1992

See you on the mountain.