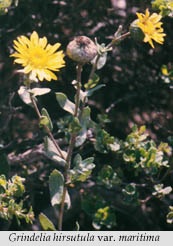 Just because spring is over doesn’t mean we have to put away our Jepson Manual and give up botanizing around the Bay. Summer and fall bring with them a whole new suite of species that are just completing their life cycles, offering lots of showy (mostly yellow) blossoms. One genus that is only just starting to flower around August is Grindelia, the gumplants.

Gumplants belong to the sunflower family (Asteraceae) and are readily recognizable by their large and abundant bright yellow flower heads and dark green, shiny leaves. They are especially notable for their very sticky (gummy) inflorescences. In the Bay Area, our gumplants are mostly low perennial shrubs restricted to salt marshes, scrub or grasslands near the coast and alkaline places inland.

Identification of species of Grindelia is made difficult by their overlapping, sometimes ambiguous, characteristics, and further complicated by the fact that they readily hybridize with each other. To make matters even worse (as if that were necessary for any genus in this family), the nomenclature has changed with the publication of each new flora. For example, in A Flora of San Francisco, California (Howell, Raven and Rubtzoff 1958), six species or forms of Grindelia were recognized as occurring in the city. Of these, A California Flora (Munz 1968) recognized only five as distinct taxa, which Grindelia hirsutulaThe Jepson Manual (Hickman 1993) has further reduced to four. Today, depending on who you talk to, only three taxa still occur in San Francisco, and two of these are recognized as special-status species by the California Department of Fish and Game (CDFG) and the California Native Plant Society (CNPS).

Grindelia hirsutula var. maritima is the rarest of our gumplants. Originally described as G. rubricaulis var. maritima from a collection made at Point Lobos by Edward Lee Greene in 1892, it probably represents the San Francisco Grindelia collected by Chamisso in 1816 (see Yerba Buena News, June 1996, page 8). Formerly known as G. maritima, it is restricted to sandy or serpentine slopes and sea bluffs below 1,300 feet in elevation in San Luis Obispo, Monterey, Santa Cruz, San Mateo, San Francisco and Marin counties. This few-branched perennial subshrub grows to one and one half feet tall. Its glabrous stems are red-brown to red-purple and its leaves are gray-green. It flowers from July through September.

San Francisco gumplant occurs at several locations in the Presidio including above Crissy Field near Lincoln Avenue, and between Baker Beach and the Golden Gate Bridge. Elsewhere in the City, it can be found on Twin Peaks, above the Laguna Honda Reservoir, and along Lake Merced Boulevard. south of Brotherhood Way. It is also known historically from Mt. Davidson, Point Lobos, Fort Funston, and Glen Canyon.

San Francisco gumplant is currently on the CNPS List 1B:2-2-3. This status indicates that the variety is rare throughout its range, distributed in a limited number of occurrences, endangered in a portion of its range and endemic to California. All impacts to this species must be addressed in environmental documents pursuant to the California Environmental Quality Act (CEQA). Until elimination of the category earlier this year, San Francisco gumplant was considered a Category 2 candidate for listing as rare or endangered by the U.S. Fish and Wildlife Service.

Grindelia stricta var. angustifolia (formerly known as G. humilis) is another shrubby gumplant that is considered sensitive by CNPS. This relatively robust perennial subshrub grows three to five feet tall and forms a dense bush of fleshy, dark green leaves with green or red veins. Glabrous stems are green to deep purplish-red and glabrous. It flowers from August through October.

Marsh gumplant is relatively common throughout our region, occurring only in coastal salt marshes in all eight Bay Area counties as well as Solano and Monterey counties. Due to the limited amount of coastal salt marsh remaining in San Francisco, however, the distribution of marsh gumplant is severely limited. It can still be seen around India Basin and at Pier 94, Pier 98 and Hunter’s Point Naval Station. It is known historically from the mouth of Islais Creek.

Marsh gumplant is on the CNPS List 4:1-1-3, indicating that its vulnerability or susceptibility to threat appears low at this time; that it is rare but found in sufficient numbers and distributed widely enough that the potential for extinction is currently low; that it is not endangered; and that it is endemic to California. Under CEQA, impacts to the variety are not required to be addressed in environmental documents.

Hirsute gumplant occurs on sandy, clay or serpentine slopes in grasslands and coastal sage scrub. It is distributed from Ventura to Napa counties. In San Francisco, hirsute gumplant is only known from Corona Heights. It is recorded historically from Visitacion Valley and Bayview Hill. The variety has no status as a protected or special-status species.