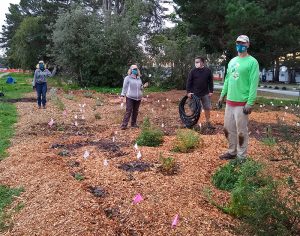 Fragmentation of habitat is a primary cause of biodiversity loss especially in urban areas. That problem is compounded when remaining corridors are filled with plants that provide little food or shelter to support local fauna.

Historically, the area where the wide Sunset Blvd. now rolls out was part of the great sand dune system of western San Francisco. It would have been vegetated with dune specialists including lupines, Eriophyllum (Lizardtail), Eriogonum (buckwheat), Fragaria (strawberry), Pink sand verbena (Abronia umbellate), dune grasses and, in seasonal wetlands, Salix (willow) and others.

Perfect for dune and scrub loving species! For humans, not so much. Other mammal species however (some still holding on by a thread here today like Gray Fox and Brush Rabbit), would have been abundant. More than a dozen species of butterflies including the famously iconic Xerces Blue (extinct since 1943) would have been fluttering by in great numbers during emergence events. 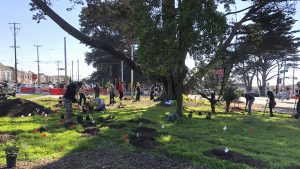 The project took two months to complete and brought in volunteers from all over the SF Bay area.

As in much of San Francisco, as the habitat types shifted to conifers and plants from elsewhere, so has the biological makeup. Today there are still a fair number of resident birds and a few butterflies, many of whom adapted to the new plantings and food (insects, nectar and fruits) regime.

Nature’s resilience always amazes but there is always a price, primarily expressed in reduced diversity and breeding success. Songbird populations shifted away from dune, scrub, marsh and grassland specialists to birds that favor gardens, lawns and conifers. Generalists like Corvids (jays, ravens, crows) have done exceptionally well while specialists have been greatly reduced in numbers. California Quail, abundant in Golden Gate Park through the 1940’s, winked out in the last few years. 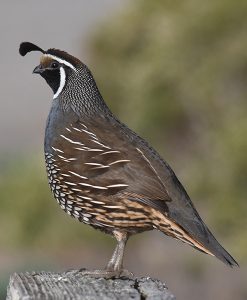 Let’s bring the California Quail back to San Francisco by planting the native plants they need to survive.

Our vision is, that if we bring back enough of the native plants these species depend on while also lowering other anthropomorphic associated risks, these species will return to fill these recreated niches. Experimentation in areas like The Presidio prove that this methodology works. You can sort of paint the fauna back in to the picture by planting the right floras for them.

Today there is still plenty of sand in the vegetated areas of the boulevard but (as we discovered while planting) much of it is covered with a layer of radiolarian chert (legend has it, from the Golden Gate Bridge excavations) beneath a thin layer of topsoil. The chert was laid down to help hold water that would otherwise run right through the hydrophobic sand.

From the 1930’s on, plantings along the boulevard have primarily been in the style of the American Victorian era which celebrated a diverse but unbalanced mix of hardy and fast growing exotics, many from the far corners of the world, plus a few regional natives such as Monterey Cypress.

Many of the trees planted since the 1930’s are at the end of their typical life span. Also,  due to city budgetary issues, much of the other vegetation is in a state of deferred maintenance and in need of an overhaul. 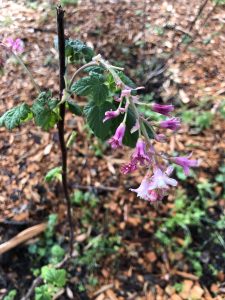 The Pink Flowering Currants are flowering now that the rains are here (December 2020).

In the past few years, SFPUC in conjunction with SF Department of Public Works (DPW) and Bureau of Urban Forest (BUF) have been adding a series bio-swales along the boulevard to capture runoff. They have also provided grants for vegetation maintenance and restoration.

Thanks to forward-looking community members and city staff, today the boulevard is being reimagined as a corridor for both people and native wildlife with long-term hopes of tying together two of the most biodiverse areas in San Francisco: the western end of Golden Gate Park and Lake Merced.

For decades, local naturalists have envisioned re-wilding the naturalized corridor that runs between them. With that in mind planning for two “test blocks” began in 2019.

However, after SF DPW budgetary and hiring freezes due to the pandemic, the project was in jeopardy. That’s when your Yerba Buena chapter, led by Volunteer Chair Beth Cataldo, stepped up and raised funds to purchase local native plants and other resources. Thanks to those funds combined with generous YB Board member donations (Thanks Beth, Paul and Jake!) and grants secured by Markos Major of the non-profit CAN! along with a whole lot of CNPS volunteer muscle, the project is now complete. 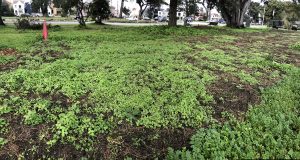 The wildflowers are sprouting from the seeds we broadcast in October.

The result: Four wildflowers meadows prepared and seeded and more than 500 herbaceous Coastal Scrub and Oak Woodland plants planted in time for our winter rains.

An article in “Sunset Strong” about the project can be found here.

If you are interested in helping us maintain these sites or help with new projects, please contact us. 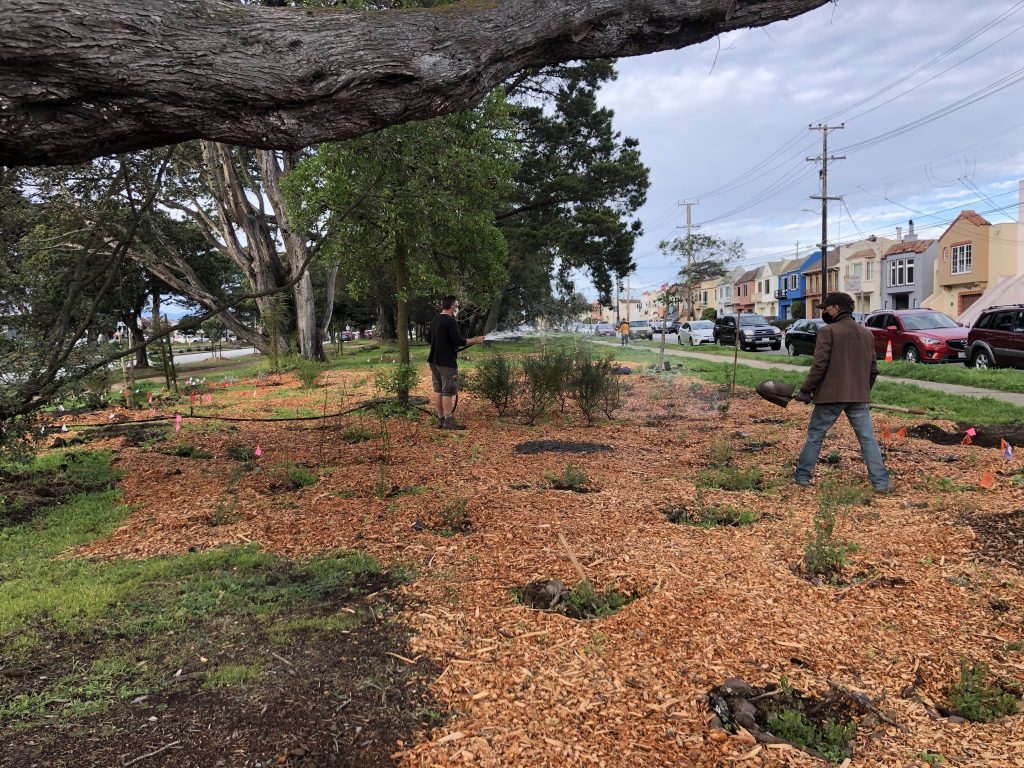 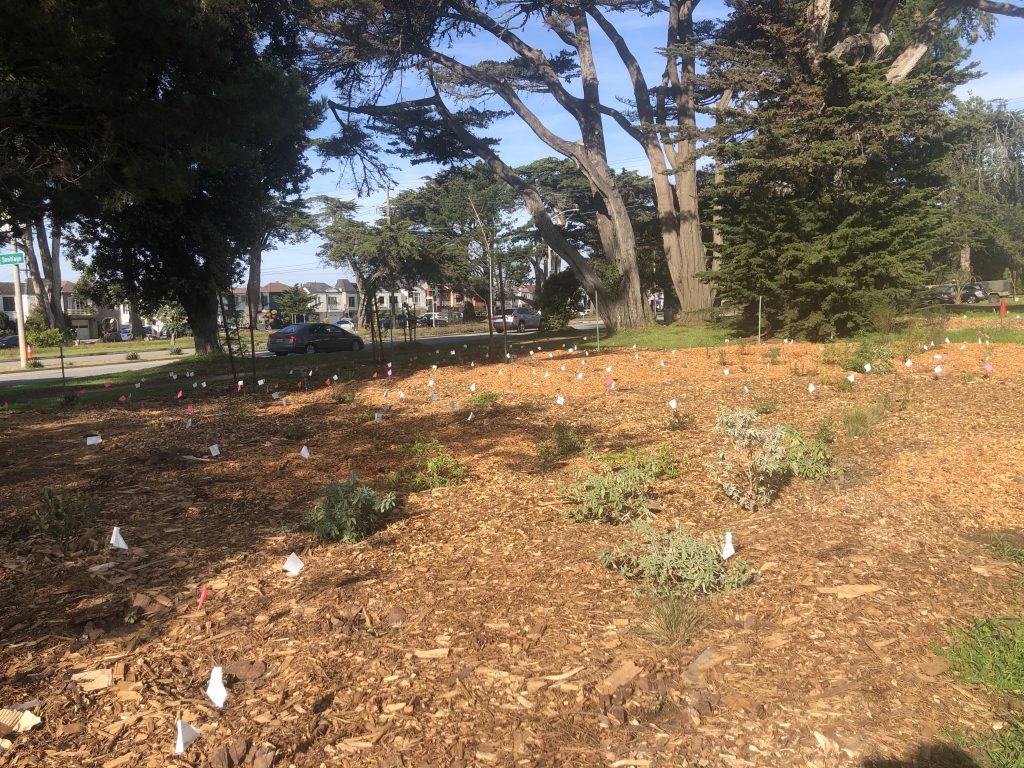