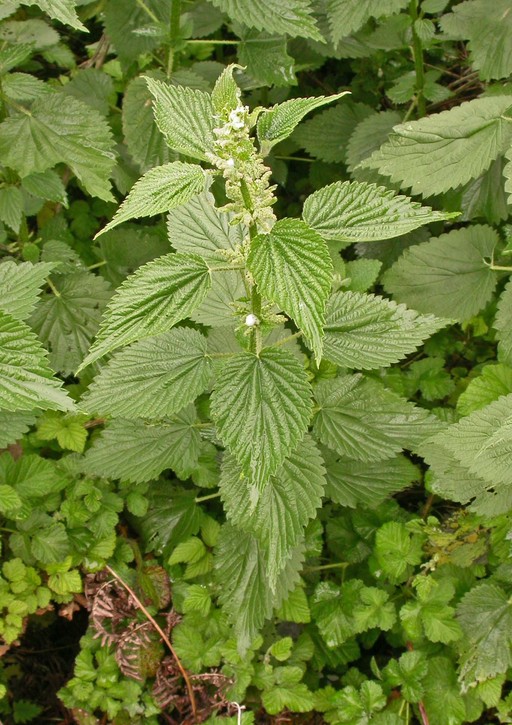 Stinging nettle might seem an odd subject for this column. It’s certainly not rare. And who on earth wants to have an encounter with a plant known for the dermal discomfort caused by contacting its stinging hairs? But there is a lot to say about this plant and, by no means, does all of it involve cursing. In fact, stinging nettle is a most remarkable plant, one that plays a rather important role in our local ecology, perhaps in some ways you might not expect. Much like poison oak, once you can look past its nasty reputation, you can begin to appreciate it for its beauty, ecological role, and even the evolutionary story it has to offer.

The nettle family (Urticaceae) includes some 800 species in 45 genera; it is found in tropical, subtropical, and temperate regions on six continents. The family consists of deciduous annual and perennial herbs, perennial shrubs, lianas, and even small trees. These flowering dicots belong to the same subclass (Hamamelididae) as the oaks, birches, sycamores, walnuts, myrtle, and she-oaks (Casuarina). It is in the same order (Urticales) as hemp, mulberry, and elm. Members of the nettle family are well known noxious weeds, invading and densely colonizing disturbed streamsides, roadsides, canopy openings, fields, and orchards. Some members are useful for the harvestable bast-fibers that make up their stem tissue. Others are popular ornamental plants like artillery fern (Pilea microphylla), Elatostema, and Pellionia.

But the family is most notable for the presence of stinging hairs that function like hypodermic needles. The short, sharp, translucent and hollow hairs have bulbous bases filled with a pain-causing liquid reported to include a histamine, acetylcholine, and an as-yet-unidentified substance. Some genera have non-stinging hairs that are soft and flexible and lack the bulbous bases. Some have both. Perhaps the most notorious of all is the stinging-tree (Dendrocnide spp.) of northeastern Australia and Indonesia. Like stinging nettles on steroids, the hairs of these invaders of rainforest canopy openings can cause excruciating pain for days and weeks, painful sensations for months and years, and has even purportedly resulted in human deaths. (What do you expect? It’s from Australia.) I once tagged along with some ecologists collecting forest regeneration data in Queensland. They had been collecting years of data on huge forest quadrats that they had to throw out when this plant took over; there was no way to work on those sites. I asked if the plant is as bad as rumored. They assured me that it was and that any attempt to experience it, even on the tiniest bit of exposed skin, would be foolhardy.

Many folks feel similarly about our own nettle, especially after pushing through a stand with bare arms and legs. All parts (stems, petioles, and both leaf surfaces) are covered non-stinging and stinging hairs which, when brushed, inject an irritant just beneath the surface of the skin. Treatments for stinging nettle include applying a topical anti-inflammatory like hydrocortisone ointment, aloe vera, saliva, or hot mud compresses, and taking analgesics like acetaminophen. My favorite tried-and-true remedy is to gather up and crush a bunch of mugwort leaves (Artemisia douglasiana), which can almost always be found nearby, and rub them over the affected area, effectively neutralizing the stinging sensation.

This perennial herb spreads from underground rootstocks, developing stout, unbranched stems three to nine feet tall. It sometimes almost forms a forest of fuzzy stalks. The fuzzy, serrated leaves are gray-green and grow up to five inches long. Recorded from 55 of California’s 58 counties, stinging nettle is generally associated with low, damp places, stream banks, and wooded or brushy flood terraces below 9,000 feet in elevation. The small, greenish non-descript flowers lack petals. The male and female flowers develop in separate clusters on the same plant, a trait that distinguishes this subspecies from Urtica dioica ssp. dioica. In our area, flowering occurs from June through September.

Last year in this column (March 2009, vol. 23, No. 1) I touched upon the surprising role non-native plants play in supporting native butterflies, and I pondered how such organisms thrived before the introduction of non-native hosts. Like the native Kellogg’s yampah (Perideridia kelloggii), stinging nettle is sure to have played (and continues to play) an important role. In this case, despite (or perhaps because of) its stinging hairs, Urtica is an important larval host plant for the red admiral butterfly (Vanessa atalanta) and the elusive satyr anglewing (Polygonia satyrus). According to Yerba Buena Chapter lepidopterist Liam O’Brien, the red admiral has made a great adaptive choice by also utilizing another non-native member of the nettle family, pellitory (Parietaria judaica), found in every crack along every sidewalk, thereby ensuring a virtual year-round flight; the satyr anglewing, however, has not made the move and is still completely dependent on the stinging nettle.

In our chapter area, stinging nettle is plentiful in Glen Canyon and is found occasionally at Lake Merced/ Brotherhood Way. It is present in the Presidio; it is abundant along Lobos Creek, and it has been included in several restoration projects at El Polin, Dragonfly Creek, and Thompson Reach. It was recently found to have spontaneously reestablished itself at the Historic Trail on Mount Sutro. Historically, it was reported as occurring in sandy soils among oaks in Golden Gate Park, at Pine Lake, Lake Merced, Mountain Lake, Lobos Creek, and above Bakers Beach (Howell, et al. 1958). Although common throughout the Bay Area and beyond, suitable habitat for stinging nettle in our chapter area is quite limited. And, like poison oak, efforts to promote its spread could reasonably be met with disdain. But not every spot on the planet needs to be comfortably accessible to us humans. We have lovely parks for casual enjoyment. In fact, it is just such defensive mechanisms as stinging hairs and caustic oils that may have kept such species around and doing what they do naturally – like feeding butterfly larvae. Now, what could be wrong with that?