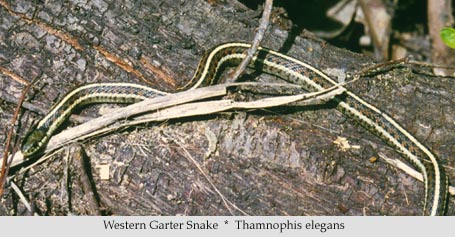 A few weeks ago I spent a few hours pruning and “editing” a two-year-old garden of California native plants in south-central San Francisco. The owner was delighted to tell me that she has three garter snakes in her garden. Her latest prize was an absolutely perfect snake skin, 27 inches long! With the greatest of care she had teased it out of her grasses. One piece, perfect. It even includes the spectacle scales over the snake’s eyes. She asked me what to do to preserve it, because she is keeping it! From what she said and what I saw, I gathered that her snakes are the land-dwelling form of the western garter snake.

Her garden also has slender salamanders, a very sedentary species that may provide some food for the snakes. An interesting thing about these salamanders is that they can feed predators without losing their lives because they have highly detachable tails which grow back. She says she has very few slugs or snails, and wonders if the snakes might be eating them. (Slugs, earthworms, and land-dwelling salamanders are the first three items listed in the garter snake’s diet in Reptiles and Amphibians of the San Francisco Bay Region by Robert C. Stebbins.)

Her delightful garden consists almost entirely of species native to California, with a few trees predating the recent plantings – a fairly large redwood, a deodar cedar, a European birch, and another I don’t recall, perhaps another redwood. She plans to remove the deodar and the birch as their native replacements mature.

Natives from elsewhere in California employed in the garden included Santa Lucia fir, California nutmeg, Catalina perfume, yellow currant (grown as an espalier), redbud, Ceanothus ‘Dark Star,’ bush anemone, wild grape, mock orange, Santa Cruz Island buckwheat, island alumroot, wild ginger, mountain garland (Clarkia unguiculata), Calystegia sp., and Eriogonum grande var. rubescens. A former denizen of the garden which was removed was the large spiny rush, Juncus acutus. This is an attractive species (native to southern California but increasingly used elsewhere), but beware working around it. She wasn’t careful enough, and it injured her eye, subsequently to be banished from the garden! So if you have to weed around one, use protective goggles! There are rushes native to San Francisco that are smaller, and thus in better scale with most gardens, that do not pose such a hazard. (Since originally writing this I found that there is an early record of Juncus acutus from San Francisco, a disjunct occurrence, since none has been found between San Francisco and southern California.)

The garden reflects five plant communities, with a meadow planting central to it all. It was designed and installed by Alrie Middlebrook of Middlebrook Gardens, San Jose, who is working on a book with Glenn Keator about garden design with California natives. Inspired in part by trips to England, Alrie is using some of our natives as the English do in small gardens, as espaliers.

One reason garter snakes thrive in the garden is because the owner leaves little piles of debris (prunings and such) under or behind the shrubbery. Rocks are also part of the design. The yard is actually rather small, and the meadow is cut by hand rather than power tools, which also helps to spare the snakes. One of my worst moments working was killing a large gopher snake with a Bachtold weed mower. It didn’t get out of the way. I was delighted to work for a garden owner who loves her snakes!

For those interested in reptiles and amphibians in the landscape, there is some discussion in Landscaping for Wildlife in the Pacific Northwest by Russell Link. I was delighted to find he includes plans for herptile hibernation mounds, a good use for waste chunks of concrete. Beware, though. In the first edition the captions for the mild winter and cold winter designs were switched, an unfortunate error.

Reptiles and amphibians benefit from having an abundance of native plants that support insects, leaf litter and coarse woody debris on the ground, rock piles or wood piles or brush piles, and ground-level water. Paving that consists of individual stones set in sand is beneficial also; oak salamanders are found in burrows under the sand-placed pavers outside my sister’s back door in Cupertino. Another sister on the Peninsula has a large, untidy wood pile-boards jutting out in various directions, lots of chinks-in her neglected urban backyard, surrounded by weeds that are rarely cut. Despite numerous cats roaming about, western fence lizards thrive in the pile, because it is an impregnable fortress for them. Cover, I think, is a major limiting factor for herptiles in urban areas. Low-growing shrubs and areas of groundcovers or low perennials allow them to move around more safely, while also producing food for them.

A few weeks ago I was pruning some low-growing manzanitas in another native garden in Cupertino that also included Carmel creeper ceanothus and redwood trees. I saw two fence lizards and an alligator lizard while I was there. The southern alligator lizard crawled straight up the trunk of a redwood, mature enough to have deep furrows in the bark. It was a typical suburban neighborhood, but not far from open spaces with native vegetation, a creek line, and some remnant oak woodland.