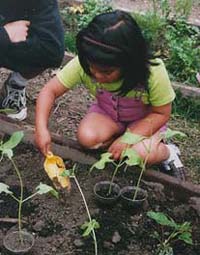 For the past eight years, with neither a degree in botany nor in education, I have found myself volunteering with public school kids in the Sunset district so that they could learn about gardening and native plants. While the students have been learning about seaside daisies and sandy soil, I’ve been learning (sometimes the hard way!) how to create a school garden with no money and a few borrowed tools. You might say it’s the School of Hard Rocks.

In 1996, I began volunteering at Lawton Alternative School, a K-8 school located two blocks from my house. Lawton’s schoolyard, which is a former sand dune like most of the Sunset, was full of weeds, so I fantasized about creating a native plant garden there. I submitted a proposal to Lawton’s principal, who forwarded it to Carol Lanigan, the school’s tutor and its newly appointed gardening coordinator. The native plant garden would become one of several projects created that year by the students.

The plot assigned was a narrow, south-facing strip near the auditorium, about 40 feet long with a 30-degree slope. The school lacked money, but fortunately some nearby nurseries, both private and public, donated plants. By the end of autumn we had pots of beach primrose, blue-eyed grass, Douglas iris, California fuchsia, California lilac, coast silk tassel, coyote bush, red currant, seaside daisy, and sticky monkeyflower to add to some transplants from my own backyard.

Two classrooms enrolled in the project, but it was John Gough’s fifth-graders who continued with the project for five years. We planted the garden in January 1997 with the winter rains. Although spirits ran high, I was surprised to see how hesitant some children were to get their hands in the earth and concluded that this was their first gardening experience. After the garden was planted, each student “adopted” a plant and identified it with a wooden stake.

The students kept a plant journal to track growth, blooms, insects, etc. They also learned their plant’s Latin name and other details. Some excitedly recorded their plant’s prodigious spring growth, making me wonder if they had ever before watched nature so closely.

A native garden is a great project for San Francisco schools because the plants grow and bloom during the mild winter, under the watchful eye of the students, then die back and estivate during the summer, when the students are absent. In contrast, vegetable gardens are difficult in Sunset neighborhood schools because there is never adequate heat in the summer, and no one is around to water intensively during July, when fruits and vegetables ripen.

Unfortunately, Lawton lost its gardening coordinator in 1998. Then, in 2002,when my son was ready to enter kindergarten, we were denied access to Lawton. So Lawton’s native-plant garden has withered over the past year, while my attention has been focused where my son was finally admitted, Sunset Elementary, in the outer Sunset. There, I have spearheaded a large garden project with donated ornamental shrubs, both native and non-native. Unlike Lawton’s garden, Sunset’s garden was planted by volunteers school-wide, with teachers, parents, students, and even the principal volunteering on several Saturdays to help out. Thanks to a generous grant from the San Francisco Green Schoolyard Alliance, next year at Sunset we will have funds to create more gardens, including two native plant gardens that will grace the front and side entrances to the school.

A garden is a work in progress. That is doubly true of a school garden, because it’s never “owned” by one gardener. Principals come and go, students graduate, districts lose funds. Keeping the garden alive and well-tended in such an environment is a challenge, even with hardy native species. Ask me next summer how our garden grows!

Many thanks to Esta Kornfield, Barbara Pitschel, Pete Holloran, Jake Sigg, Greg Gaar, and David Graves, who are sources of inspiration and knowledge for me.

QUESTIONS TO ASK BEFORE YOU PLANT A SCHOOL GARDEN

Chapter member Christine Colasurdo is a professional writer. Her work can be seen in Bay Nature and California Wild. Christine grew up in the shadow of Mt. St. Helens, and is the author of Return to Spirit Lake: Journey through a Lost Landscape (Sasquatch Books 1997). She presented a program on that subject for the Yerba Buena Chapter in 1999.-Editor