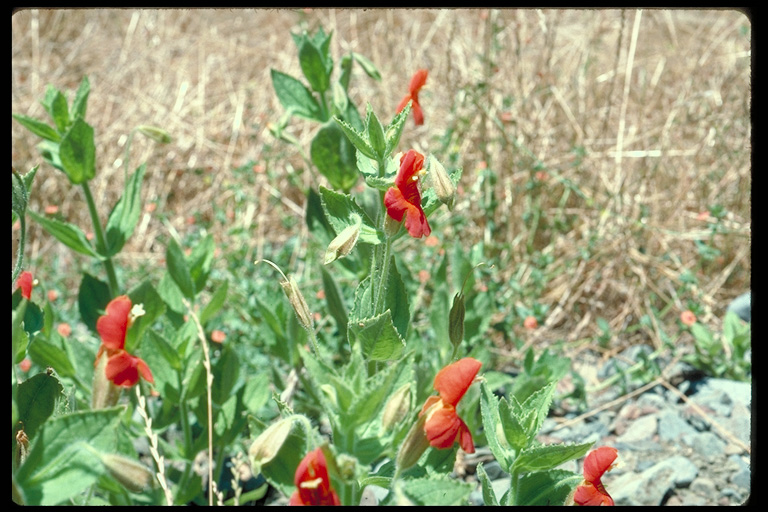 With blossoms reminiscent of red lipsticks on a stalk, scarlet monkeyflower is eye-catching indeed. A perennial herb found in moist to wet areas along streams and seeps, you can’t help but stop and stare when you happen upon this plant. And the inescapable thought comes to mind: “this would look wonderful in my yard”.

Until recently, the genus Mimulus was assigned to the figwort family (Scrophulariaceae). (Yes, you’re going to have to un-learn that fact!) However, research into the phylogenetic relationships on members of the family now place the genus in the lopseed family (Phrymaceae). This family includes taxa found in a very wide array of habitat types primarily in North America and Australia. Family members are distinguished by having tubular calyces with five-toothed lobes and readily dehiscent (split open upon drying) capsules. Members include diminutive annuals and herbaceous perennials to shrubs up to 13 feet tall.

The monkeyflowers, so named because the flowers of some resemble monkey faces, include some 150 species. The center of diversity for the genus is western North America, but it is also represented in South America, Asia and Australia. California is host to some 88 native species and subspecies. Of these, three are presumed to be extinct (CNPS List 1A). Members of the genus considered to be rare include 11 taxa on the CNPS List 1B, three taxa on List 2, one taxon on List 3, and 15 taxa on List 4.

Scarlet monkeyflower is a stout perennial herb with hairy stems reaching up to 2Â½ feet high arising from rhizomes. Clasping the stems, the opposite leaves are from 1-3 inches long with three to five pronounced veins arising from the leaf base. Flowers develop singularly in the axils of the uppermost leaves at the end of 2-3 inch-long pedicels. The tubular blossoms are orange to red, up to 2 inches long, with five reflexed lobes. In our area, flowering occurs June through July.

As mentioned above, scarlet monkeyflower occurs in moist to wet ground. It has been recorded in 45 of California’s 58 counties, occurring throughout the California Floristic Province and the Desert Mountains region, at elevations below about 7800 feet. It is also known from Oregon, Nevada, Utah, New Mexico and Baja California. With such a broad range, you might be asking why it’s a topic for this column. But like so many species restricted to wetland habitats, it’s range and occurrence is being affected by human activities.

As reported in Howell, et al. (1958), from collections made in 1865, scarlet monkeyflower was reported to occur on creek banks in San Francisco; however, by 1958 it seems to have been extirpated. In 2000, using seed collected in the Crystal Springs area, Jake Sigg reintroduced it to Islais Creek in Glen Canyon, where it persists but is at risk from competition by invasive non-natives. It occurs sparingly elsewhere in the San Francisco Peninsula. It is not uncommon in the East Bay. Due to its historic occurrence in San Francisco, scarlet monkeyflower is proposed for addition to our chapter’s list of locally significant plant species.

The nice thing about scarlet monkeyflower is that it is hard to miss and unlikely to be confused with anything else. So, as you’re traipsing around the City’s few remaining freshwater wetlands this summer, keep an eye open for it. As always, if you come across it, please let us know. And (do I really need to say it?), please don’t collect it for your garden! Scarlet monkeyflower is quite readily available from suppliers of native plants. I’m finally getting around to trying it out in my yard.