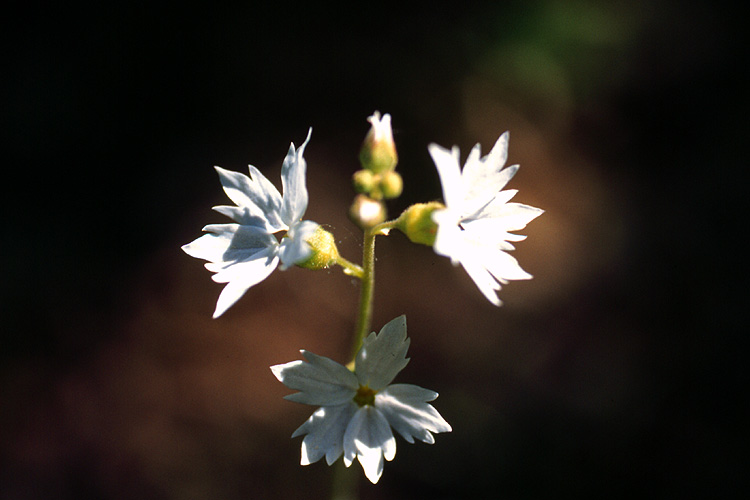 San Francisco woodland star is one of those pretty little herbs you encounter in the early spring on our coastal hillsides, along with similar beauties like milk-maids (Cardamine californica), hound’s tongue (Cynoglossum grande), common yarrow (Achillea millefolium), California buttercup (Ranunculus californicus), checker mallow (Sidalcea malviflora), and Johnny Jump-up (Viola pedunculata). It’s always a delight to come across patches of these delicate flowers in a sea of green (native or otherwise).

Perhaps reminiscent of some members of the Ranunculuaceae or even Asteraceae, San Francisco woodland star actually belongs to the saxifrage family (Saxifragaceae). The Flora of North America lists ten species of Lithophragma, all found in the west and nine of which occur in California. One species, San Clemente Island woodland star (L. maximum) is both a federally and state-listed endangered species. The genus name is derived from the Greek word lithos, meaning stone, and phragma, which means hedge or fence, alluding to rocky habitat. These perennial plants are rhizomatous and sometimes bear bulbils in the axils of the leaves.

San Francisco woodland star is a robust perennial herb producing simple stems 8-20 inches tall. Foliage consists of a rosette of basal leaves about 2 inches wide and with 3-5 lobes, and of deeply three-lobed and much reduced cauline leaves. Flowers develop on nodding racemes as much as 23 inches tall. The half-inch flowers are white with shallowly 3-lobed petals and obscure venation. Flowering is very dependent on adequate rainfall and typically occurs from March through May. Vegetative reproduction also occurs through the production of aerial or subterranean bulbils.

Although widespread (woodland star is recorded from 44 of California’s 58 counties), it is often found only locally where conditions are just right, and grazing and competition from non-native plants are minimal. It is primarily found in the coastal hills and mountains of California and southern Oregon, from sea-level to as much as 6500 feet in elevation. It occurs in open grasslands and bluffs in oak and oak-conifer woodlands on moist, well-drained and often rocky sites.

In a previous newsletter (vol. 23 no. 2, June 20092), I discussed another member of the family, California saxifrage. I won’t repeat the discussion of the family’s traits and related taxa. In that article, I was upbeat about its rediscovery in San Francisco. I feel less positive about San Francisco woodland star’s fate in the City. Historically known from moist, shaded slopes in brush and grasslands at Lake Merced, Brotherhood Way, and Bayview Hills1 (Howell, et al.1958), its presence in the City is tenuous. It still occurs at Bayview Hill on a cliff face overlooking the stadium, but even there it is facing increasing competition from poison oak and yellow oxalis (J. Sigg, pers. comm.); Randy Zebell of the Natural Areas Program counted 20 plants there in 2010. It has also been reported from a single occurrence at Glen Canyon Park in coastal scrub; according to chapter member Rich Craib, that population may have been lost. Jake Sigg also has reported a sighting of a single plant while weeding a north-facing cliff at The Rocks at 14th Avenue and Ortega Street. In 1995, woodland star was also reported from Twin Peaks growing above Burnett Avenue. As this later site has been the subject of attention for weed control, it may still be there. There are no recent records of San Francisco woodland star from the Presidio.

In San Mateo County, San Francisco woodland star is found on San Bruno Mountain, Montara Mountain, Edgewood County Park, in the Crystal Springs watershed, and on Jasper Ridge. Elsewhere in the Bay Area, San Francisco woodland star occurs throughout the Santa Cruz Mountains and the hills of Marin County. In Contra Costa and Alameda counties, it is known from the Berkeley and Oakland Hills, Mt. Diablo, and the Mt. Hamilton Range.

Despite its occurrence over a wide geographic range, San Francisco woodland star is very uncommon in our chapter area, despite a fair amount of suitable habitat. Competition with invasive plants poses a very serious threat to the limited number of plants remaining. The rarity of the species here, the small number of individuals in each population, and the threats they face make San Francisco woodland star a prime candidate for inclusion in our chapter’s list of locally significant plant species3 (for a discussion of this list, please see chapter newsletter Vol. 23. No. 3, September 2009).

This spring, do yourself and us a favor by keeping an eye open for this lovely little wildflower as you explore our grassy hillsides. If you find it, be sure to make a note of the date, location and number of plants, and threats, and let us know about your discovery. Take some photos, too, but whatever you do, please don’t pick this or any of our other natives… we want to keep them around as long as we can.