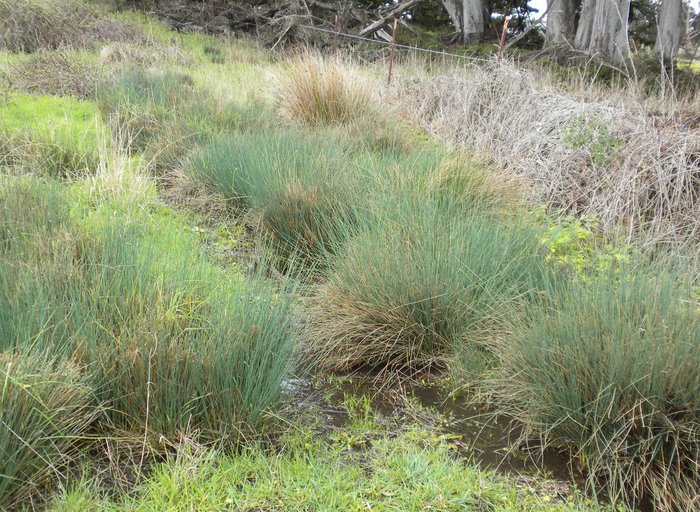 As you recall, the flowering vascular plants (the angiosperms [which means “enclosed seed”], Division Magnoliophyta) are divided into two groups, the dicots (plants whose seedlings have two “seed leaves” and flower parts typically in combinations of 4 or 5; Class Magnoliopsida) and the monocots (plants whose seedlings have one “seed leaf” and flower parts typically in combinations of 3; Class Liliopsida). Looking back over the list of species I’ve touched on in this column, I seem to have done a pretty good job of ignoring the monocots. Let’s see… there were articles on the orchids, fragrant fritillary, three on grasses (Pacific reedgrass, purple needlegrass and coastal terrace prairie), yellow mariposa lily, and flowering quillwort. That’s only seven monocots discussed since 1994. And I’ve never introduced any members of the rush family (Juncaceae).

In my defense, our objective in starting this column was to promote enthusiasm for our native species. It seemed prudent to focus on the most charismatic species, those that are exciting to the layperson to discover in the field and relatively easy to identify. Some folks find it hard to develop much appreciation for plants that lack showy flowers or have flower parts with strange names and are difficult to see. And to many people, all these grass-like things look alike (ok, I confess it… to me too!) But is that any reason to ignore such an important group of wetland inhabitants like the rushes? I think not. So, let’s just do it.

Although not fantastically diverse (about 350 species in 9 genera [by comparison, the Asteraceae has about 23,000 species in 1,500 genera!]), the rush family is fabulously successful, having spread over six of the seven continents and occurring from the Arctic and temperate regions to tropical mountains. Life forms include diminutive annuals (true “belly plants”) to stout caespitose (growing in dense tufts) or rhizomatous perennials. The stems, or culms, can be round or flat. Leaves can also be round or flat and can be difficult to distinguish from stems; they can arise from the stems or the rootstock (basal) just like the stems. Only two genera occur in North America and California; Juncus and Luzula.

I learned to differentiate between rushes, sedges and grasses by a little mnemonic device: “sedges have edges and rushes are round” (the part about grasses, referring to their hollow stems, isn’t really fit to print, sorry). The rush genus (Juncus) includes some 315 species worldwide, with 95 species included in the Flora of North America. The second edition of The Jepson Manual (TJM2; Baldwin, et al. 2012) lists 56 native species (14 subspecific taxa) and eight non-native species (three subspecific taxa). Our rushes are primarily restricted to soils that are at least moist well into the dry season, occurring in fresh/alkaline/saline marshes, meadows, seeps, springs, creek banks, washes and pools. Members of the genus can be found throughout the state from the Mexican border to Oregon, from the coast to the interior valleys, Sierra Nevada and Great Basin. The genus is poorly represented in the Mojave and Sonoran deserts.

Based on some revisions to the genus in TJM2, our chapter area supports 12 species of Juncus. This is a pretty respectable number considering the species’ restriction to moist habitats and wetlands, which haven’t fared well in this urban setting, and the size of our chapter area. By comparison, 15 species each are known from the Santa Cruz Mountains (Thomas 1961), Marin County (Howell, et al. 2007), and the East Bay (Ertter 1997). Still, our rush species are limited in distribution to as few as one and as many as eight of the City’s 35 remaining natural areas. And it’s a safe bet that many of the populations are a) very small, b) overrun by invasive species, c) degraded by neglect, maintenance activities, or human encroachment, or d) all of the above.

Identifying members of the genus can be a bit challenging. As with the grasses, there is some new terminology to learn. Also like the grasses, the rushes have pretty small floral parts that defy the usual descriptions. So here is a brief primer on the identification of the rushes of San Francisco.

One convenient character of rushes is the stem and leaf shape; they are either round or flat. The flat-bladed species might remind you of a smallish iris or gladiolus leaf (implied by the name for the leaf shape, “gladiate”). There aren’t that many species with flat leaves and stems. Only three of our rushes have flat leaves and all are perennial. Two species (brownhead rush – J. phaeocephalus, iris-leaved rush J. xiphioides) have leaves that are “iris-like”, with the edge of the blade facing the stem. The third species (sickle-leaved rush – J. falcatus) has leaves that are “grass-like”, with the flat side of the blade facing the stem. Round Stems – Annual

Three of our species spread by creeping rhizomes and appear as individual, closely-spaced stems popping up in patches; these do not form dense tufts or clumps. Wire rush (J. balticus) is the most common and widespread of the three. It is distinguished by lacking leaf blades; it sends up only stems. Mexican rush (J. mexicanus), which is only recorded from the Presidio, has well-developed leaf blades on some stems. Salt rush (J. lescurii — mistakenly called J. leseurii) is distinguished from wire rush by its larger perianth (>6mm).

The remaining four species in our chapter area are all perennials, forming dense clumps or tufts. The stems of blue rush (J. patens) are blue to gray-green, which is quite distinctive from the others; it is found in marshy sites, creeks, and seeps. Green or Pacific bog rush (J. effusus var. pacificus) has shiny, green stems forming clumps to over a meter tall; distinguishing it from coast rush (J. hesperius – previously J. effusus var. brunneus) isn’t for the faint of heart. Slender rush (J. tenuis) and western rush (J. occidentalis) are easy to distinguish from the others by their slender and much shorter stems (

Where to Look for Rushes

Start by looking for damp areas where the soil is kept moist by surface water such as seeps and springs, edges of lakes and marshes, bogs, and moist hillsides, and shallow, seasonal pools. Most rushes are fond of sunny spots.

Eleven of the 12 species in our chapter area have been recorded from the Presidio. Seven taxa can be seen at McLaren Park, six at Glen Canyon, and five at Yerba Buena Island. Three species each can be seen at Pine Lake and O’Shaughnessy. See which ones you can find.

The Golden Gate National Recreation Area (GGNRA) has developed a preliminary list of species of local significance for the Presidio (Frey and Stevenson 2010). Western rush is the only species assigned to that list. We have not yet determined which of the rushes to include on our chapter’s list of locally significant species, but it will likely include additional species due to their limited distribution and threats to their populations.