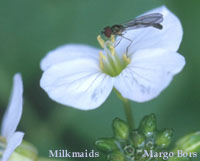 We have been misled. Many people, nature phobics and plant lovers alike, respond to insect visitation with alarm, suspicion, and sometimes physical aggression and often-unjustified retaliation. While inundated with negative press on the one percent of insects that cause economic or medical problems, we are seldom reminded that 99% of the interactions between plants and insects are either beneficial or neutral. Beneficial interactions primarily involve native insects and native plants (no offense meant to the heroic European honey bee, Apis mellifera, which pollinates many of our commercial crops in California). The vast majority of flowering plants rely on insects for pollination, while many insects rely on plants for food, domiciles, and as a source for chemical compounds used in defense, pheromone production, and other activities. As testimony to the beneficial and faithful quality of the relationship, a single female of a solitary bee (Habropoda sp.) may visit more than 620 virgin flowers for pollen to provision a single nest, and over her lifespan she may visit 50,000 flowers, producing more than 6,000 berries.(1) These berries are of course then used by other animals including humans. The story of the interrelationship between the monarch butterfly and the milkweed plant (Asclepias spp.) is well known, but few people are aware that the major pollinator of milkweed is the bumble bee (Bombus spp.) 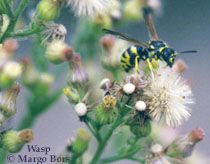 Many different kinds of insects pollinate plants. Bees always come first to everyone’s mind. However, flies, beetles, wasps, moths, and butterflies also are important insect pollinators. This interrelationship between plants and insects has influenced flower shape and three biochemical factors in plants: scent, flower color, and the nutritional value of nectar. In short, plants and insects have contributed to each other’s evolution; our native plants have evolved closely with our native insects. The two are inseparable.

Scents
Probably the first signal that a plant sends out to attract an insect pollinator is an olfactory cue. Insects “learn” to recognize the smells of flowers. Scents, at least from a human perspective, are broken into two categories: pleasant and unpleasant. Not surprisingly pleasant odors produced by plants have received more research attention than unpleasant odors. Bees are especially tuned into flower scents which would be perceived as pleasant by humans. Scent is of primary importance to nocturnal pollinators such as moths. Unpleasant odors that are utilized to attract flies for pollination actually represent chemical mimicry; the plant produces a smell that mimics the smell of decaying meat or feces to persuade carrion or dung beetles and flies to focus attention on its flowers. Scent production by plants is closely synchronized with the activity patterns of their pollinators. 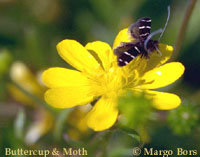 Certain colors are particularly attractive to certain insect pollinators. Very generally, bees prefer yellows, blues, and whites; beetles prefer creams or greenish colors; flies prefer browns, purples, or greens; moths prefer reds, purples, whites, and pale pinks; butterflies prefer bright reds and purples. However, keep in mind that there are many exceptions. Some flowers (e.g., Eriophyllum, Rudbeckia, Helianthus, Papaver), particularly those associated with bees, have co-pigments that produce nectar guides which guide the bees to the nectaries. Some nectar guides are not visible to the human eye but are detected by the bee eye due to its ability to see colors in the ultraviolet range. Some plants even shift their pigment production seasonally to attract different pollinators. When its hummingbird pollinator migrates out of the area, the flower color of scarlet gilia (Ipomopsis aggregata), a California native, shifts from red to pink to white to attract a second native pollinator, the hawk moth Hyles lineata. In other species, flowers may change color after being pollinated, triggered by the removal of nectar. This directs the pollinator toward the unvisited flowers and improves the efficiency of pollination and nectar gathering. Color shifting has been recorded in 74 angiosperm families.

Nectar
One of the most important reasons that insects visit flowers is to obtain nutrition, primarily from nectar. (Pollen is also an important food source for larval bees and is collected to provision nests.) Nectars consist primarily of sugars in varying proportions of glucose, fructose, and sucrose. There is a relationship between the ratio of sugars present and the type of pollinator partner. Flowers with nectars high in sucrose are generally pollinated by large bees, hummingbirds, butterflies, or moths. Flowers with low sucrose are generally pollinated by small bees, passerine birds, or bats.

Nectars also contain amino acids, lipids, and occasional toxins. There are ten amino acids which are essential for insect nutrition (arginine, histidine, lysine, tryptophane, phenylalanine, leucine, methionine, threonine, isoleucine, and valine). In fact, all the common amino acids are present in nectar. Some insects, particularly butterflies, are almost entirely dependent on nectar for their nutritional needs. The amounts of amino acids are sufficient to provide insects with an essential supply of nitrogen. The variation in amino acids between species can be used as a chemotaxonomic character to distinguish species. It appears that plants have evolved to produce larger amounts of nitrogen in response to the nutritional needs of their chosen pollinator.

Nectar toxins can have two sides. Some flowers produce toxins that are poisonous to the pollinator (e.g., buckeye, Aesculus californica; some species of Rhododendron); some are secondarily hazardous to humans when they consume contaminated honey, specifically from plants with pyrrolizidine alkaloids.(2) The flip side is that some butterflies (e.g., monarchs and the Ithomiidae in South America) require certain alkaloids found in certain plants (e.g., Eupatorium, Ageratina) to produce sexual pheromones.

Plants may have other sources of nectar in addition to their flowers. Extrafloral nectaries are sugar and amino acid producing glands which occur on leaves, stems, bracts, or petioles. Their purpose seems to be to attract specific ant species which protect plants from herbivores or seed predators. Although the literature focuses on examples of interactions in the tropics, these relationships most assuredly exist here but are less well studied.

Supporting Native Plants
How do you support native plants and native insects? Plant locally-native plants and declare a truce with your insect neighbors. (That means hold back on the insecticide raids.) The best way to find out what insect-plant associations exist in your area is to go to nearby natural area or an arboretum with a good diversity of native plants on a sunny warm day, preferably between 10:00 am and 2:00 pm (peak activity hours for diurnal insects). Your backyard is also a good study site. Take an afternoon and visit another world filled with beautiful colors, wonderful smells, incredible variety, and hard-working inhabitants. Sounds a lot like paradise. Enjoy!