The author is a noted British plantsman, lecturer, writer, and broadcaster. This article is reprinted from the December 2001 issue of The Garden: Journal of the Royal Horticultural Society.

I gingerly picked my way through a sea of swords, looked down upon by giants on all sides. There was a cool calm, disturbed only by a feckless breeze tugging at the huckleberries that sprouted willy-nilly from decaying stumps. This may sound like a scene in Lord of the Rings or a Harry Potter adventure, but it was my first experience of the Sequoia sempervirens (coast redwood) forests of northern California. The year was 1992 and I was on a family tour heading south along US Highway 101 bound for Eureka and San Francisco. After years of reading and hearing about Sequoia, here I was at last, admiring and enjoying the silence and drama of these famous forests, containing the tallest trees in the world. What most impressed me was the dominance of just two plants-redwood and Polystichum munitum (sword fern). There were other plants in the understory, of course, but my lasting impression is of these two primitives in such harmony. Volumes have been written on the redwoods, and their survival is a tribute to the efforts of people such as John Muir, the great 19th-century naturalist and founder of the American Conservation Movement, together with the continuing work of the Save-the-Redwoods League, which was founded in 1918. But, compared to redwood, little has been written about sword ferns or, to give them their full English name, western sword ferns-for there is another species, P. acrostichioides (eastern sword fern), that is native to eastern North America. The name Christmas fern has been applied to both species in reference to the evergreen or persistent nature of their fronds and their consequent use for indoor decoration during the festive season. Both are also popular garden subjects, though P. munitum is, in my opinion, the more impressive.

Polystichum munitum (munitum meaning armed, with teeth) is a robust perennial forming a stout clump of laddered or pinnate fronds, which are lance- or sword-shaped in outline, often curving to one side in the upper half. The divisions (pinnae) are arranged in parallel ranks either side of the stalk (rachis), which is green, except for the dark base, and freely clothed with loose, narrow, brown, papery scales. The narrow segments have finely-toothed margins and are slender-pointed, broadening at the base to a short stalk, at which point there is a characteristic pointed lobe or “ear” on the upper side. In the wild, P. munitum is found from upper Baja California north to Alaska and western Montana, and is particularly abundant west of the Cascade Mountains. Its favored habitat is in moist, coniferous woodland from near sea level to middle elevations in the mountains. The size of frond varies according to the growing conditions. 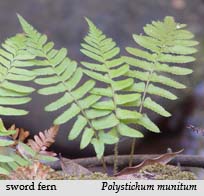 Sword FernPlants in a dry border at the base of a privet hedge in my garden produce fronds averaging 60-75 cm. (24-30 in.), while some plants I have seen in cool, moist woodland in northwest America sported fronds up to 1-1.2 m. (3-4 ft.) tall. The young fronds or crosiers appear in early spring and look like tightly coiled springs covered with a pelt of silvery-white scales. The tips droop backwards for a time, straightening out as the fronds gain height and become stronger. The fertile, spore-bearing fronds generally appear first, soon followed by the sterile fronds. In autumn, fertile fronds bear rows of coffee-colored dots along the margins beneath the segments, which darken as they ripen. Sterile fronds, by contrast, are plain green beneath. Thousands of spores are produced on the fertile fronds and are then carried on the wind. These will germinate if they land in a suitable spot, but only a tiny proportion manages to do so.

So impressed am I with P. munitum that I have planted several in my relatively small garden even though every plant in every space has to justify its presence. This is partly because the fern’s tough, adaptable nature makes it extremely suitable for difficult sites, and what could be more difficult than the base of a privet hedge? Not only that, P. munitum is a garden-designer’s dream. Its bold, laddered fronds can be used singly in isolation or in groups as a focal point in the garden. A single, well-grown clump presents an eye-catching appearance and is, inevitably, a source of inquiry or comment. This Polystichum also has a more utilitarian use as a gap plugger in the shade border. I have even seen it grown in large containers for use on the patio or in shaded backyards. Ideally, it should be given some light shade, especially if this means cool conditions, though it will take a more open sunny position so long as moisture is available. Moisture is conducive to maximum growth but P. munitum, unlike Matteuccia struthiopteris (shuttle-cockfern), is not for permanently wet or boggy soils, preferring better drainage. Whether the soil is alkaline or acid in reaction does not appear to be a problem, provided extremes are avoided.

One of the first Europeans to collect P. munitum was probably Archibald Menzies, a Scottish surgeon-botanist. He twice visited America’s northwest coast in the late 18th century-first on Captain Colnett’s ship “Prince of Wales” in 1788, and secondly, and more famously, with Captain George Vancouver on the “Discovery” four years later.

Polystichum munitum has a long history of use by Native Americans as a drug to help numb the pain of childbirth, for the treatment of burns and sores, and as a food-for which the rhizomes are steamed, boiled, or pit baked. It was also used as a primitive bedding, as a floor covering, to provide a clean surface for preparing fish or meat, and for lining baskets.

There cannot be many plants, let alone ferns, that are suitable for growing in difficult sites, yet provide such a package of ornamental treats.