To find an illustration of the function of natural controls on an organism, one needs look no further than yellow oxalis (aka sour grass or Cape sorrel, Oxalis pes-caprae), a scourge of the California coast. It is a rare and endangered plant in its South African home range; native fowl eat the foliage, a mammal digs the bulbs, and parasites infest bulbs. Freed from these energy-suckers, its spread along the California coast is untrammeled.

My purpose in writing this article is:
(a) to elicit help in determining how yellow oxalis disperses
(b) to heighten awareness of its surreptitious spread, and
(c) to suggest removal techniques and potential problems with those techniques.

People are incredulous to learn that viable seed from this plant has never been reported in California. After absorbing this information, their exasperated question follows: “But HOW does it do it, HOW does it get around?” Oxalis’ abundant production of bulb offsets and lateral runners partially accounts for but doesn’t fully explain its alarming spread – how it travels so fast, how it gets across the road or 100 yards up the hill or into a second-floor flowerbox. Contaminated soil may account for some occurrences, like the window-box, but that can’t explain all the populations, especially in wildlands. Perhaps I should borrow an idea from scientist Joe Balciunas, who offered a $100 reward for anyone finding fertile seed of Cape ivy (Delairea odorata) in California for his biocontrol research project on that plant. It worked for Cape ivy; viable seed was found and Joe is $100 poorer. I will make an identical offer to anyone who produces viable seed or verifiable seedling of yellow oxalis. Don’t expect to snag some easy money here – that’s my challenge.
(Jake Sigg, 338 Ortega Street, SF 94122; 415-731-3028 – jakesigg@earthlink.net)

The latest version of the California Exotic Pest Plant Council (CalEPPC) weed lists, published in 1999, treated yellow oxalis as needing more information. Up to then it had been considered a weed of disturbed areas (a relative term – is there any part of low-elevation California that is not disturbed?). At that time oxalis began rising on my worry list and in the last three years I have become panic-stricken as I see it proliferating across landscapes. In heavy soils it multiplies rapidly; in sand it explodes. In a remnant native plant community occupying a stabilized sand dune near my house in western San Francisco I watched a small semi-circular infestation with an approximate radius of 20 feet spread seemingly exponentially in less than ten years to dominate the whole ten-acre natural area, and it is now on its way to becoming a monoculture. I wasn’t watching its progress that closely because I was too preoccupied with other concerns, but it surely did not spread entirely by lateral runners. It must have leap-frogged – I wish I had time-lapse photos. Now it may not be possible to save the site’s biological community.

I don’t know how or when it came to California. Bailey’s 1930 The Standard Cyclopedia of Horticulture listed it (as O. cernua), so it was probably in the horticultural trade at that time. It is not listed in the wild in Jepson’s 1925 Manual of the Flowering Plants of California. The first mention of it as a weed that I know of was as O. cernua in the 1951 Weeds of California by Robbins, Bellue, and Ball. They reported it in orchards in the San Francisco Bay Area and southern California. It may have been more widespread than that, and it may have been in cultivated sites before 1925. It has been in the Mediterranean area since the 18th century and it doesn’t produce seed there either. 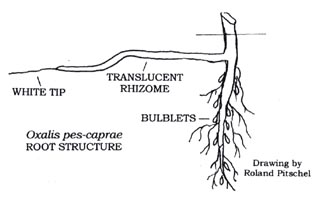 It certainly does like disturbance.* However, it no longer requires active soil disturbance to become established and it is an increasingly aggressive invader of native plant communities. Once established in a grassland, dune, or even shrubland, its advance is inexorable and without human intervention the outcome is inevitable: eventual displacement of the invaded community. Although it is active only during the brief rainy season, populations nevertheless rapidly expand, displacing plants that are photosynthetically active year-round. Free of the need to produce extra energy to support wildlife, the robust photosynthetic engine pumps out enormous quantities of energy to produce (about February or early March) prodigious bulb offsets and lateral runners in all directions to invade surrounding areas and to muscle out even plants that are much larger than itself. The lateral runners travel several inches at a time; they are peculiar fat, translucent organs resembling icicles, with emergent slender white shoots at the tips. They insert themselves into the middle of an already-crowded clump of healthy natives, even into the tight center of a vigorous bunchgrass or rush, from where they steadily burgeon, to the detriment of the larger plant. Among low-growing plants oxalis directly competes for space and light in addition to its root competition. Its roots compete even with native shrubs such as coffeeberry or coyote bush. Whether this direct competition can weaken or eventually kill a shrub is not established, but it is certain that it will prevent a new generation of that or any other plant at the site. Thus, long-term prognosis is for a monoculture of oxalis. No matter which community is invaded, year-by-year the oxalis becomes stronger and the other plants become weaker. It even out-competes many aggressive weeds. It favors the same habitats as its fellow South African, Ehrharta erecta (see CalEPPC Newsletter, Summer/Fall 1996 [available in Strybing Library]). It will be interesting to see which of these two bullies predominates on a given site; ehrharta is the only plant I know that can prevent oxalis from becoming a monoculture (with the exception of Cape ivy, which on a favorable moist or shady site can smother both oxalis and ehrharta).

Eradication is difficult and time-consuming because of that bulb. A small infestation in a discrete area is a feasible project, but for large tracts spraying may be the only option**, although a judgment call may arise if the infestation is at an advanced stage and the oxalis is so intermixed with the natives that killing it may entail killing the native – a difficult choice. In that kind of situation, some people reason that they are going to lose the community anyway and eradicating the weed will allow them to re-establish the natives. I was able to manually rid it from my garden, which contained many hundreds of oxalis, by persisting in removal of the above-bulb parts for four or five years. Repeated timely removal of top-growth will deprive the bulb of its stored energy. Optimum time for this is winter or early spring just before it starts producing offsets. Placing fingers beneath the crown and pulling gently but steadily (two hands better) will frequently get the whole taproot, especially when it’s growing in sand. The bulb will probably remain and still have some stored energy to produce more top-growth. A repetition of the preceding operation during the same season will either kill the plant or draw down its energy so severely that one more pull usually effects kill, providing it is well-timed and does not allow time for bulb to recharge. There is need for monitoring for an additional two years to make certain, as I have sometimes found a single small leaf hiding among other plants, slowly building up its bulb’s strength for a comeback.

I hope this article will elicit interest in this pernicious weed and – who knows – perhaps generate a satisfactory explanation for its spread.

* An amusing side note is provided by a weed brochure produced in the Bay Area that contained otherwise good information; it recommended getting rid of oxalis by rototilling, a sure-fire way of quadrupling its numbers overnight! (Please, pleaseâ€¹don’t throw me in that briar patch!)

** I don’t know of definitive information on effectiveness of herbicides on oxalis bulbs. Anecdotal information I received says that 2% glyphosate is effective providing you have a good surfactant; oxalis leaves tend to shed water. I have not verified this information. A further consideration is if the infestation is in grasslands with few or no native dicots present, triclopyr may be a better choice, as it is designed to kill dicots but not monocots.