“I remember Mimi asking me as a child to make a lens by curling my fingers around to my thumb. I closed one eye and, with the other, looked through my hand lens. I played with scale. Blades of grass were transformed into trees, a gravel bed became a boulder field. Small rivulets pouring over moss became the great rivers of our continent. My world was my own creation. It still is.”-Terry Tempest Williams 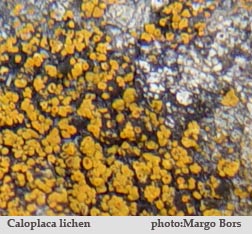 Caloplaca lichenIt sometimes seems-at least to a city dweller-that we are intent on destroying the last vestiges of the natural world. In San Francisco, there is one redoubt for the natural in the form of lichens, which are happy in seemingly inhospitable places. (I am, for the time being, ignoring their vulnerability to air pollution.) They unobtrusively go about their business of photosynthesizing, in the process creating forms, textures, and colors of exquisite and subtle beauty. Few, if any of them, are noticed by passers-by, hurrying to their next task in the human-created world. I am confused by our ability to recognize beauty when it is framed and hanging on a museum wall, while we remain oblivious to everyday scenes which, if viewed in a museum, we would praise. Why do we not see these scenes without the imprimatur of a museum? There is further irony in the fact that the artifact-storage function of a museum is a poor substitute for the real thing.

Lichens are most common on tree trunks and rocks, especially on their north sides, but I have found them on concrete sidewalks and painted metal railings, even on a car (see Yerba Buena News , v.18, no.1 (March 2004), p.10). If you look at our concrete sidewalks you will notice a dull orange coloration. That is a lichen in the genus Caloplaca, and it likes calcium. (A species of Caloplaca is responsible for those brilliant oranges above treeline on the exposed granite peaks of the high Sierra, blasted by icy winds and under constant irradiation by ultraviolet rays. A different species enlivens pines and cypresses along the immediate coast, here and, especially, at Pt. Lobos State Reserve south of Carmel.)

Various hues of sage greens are the most common colors of lichens, but there are whites, grays, blues, yellows, and oranges-even bright red in the case of a species called “British soldiers.” I had a small colony of a brilliant chrome-yellow lichen growing on a curbside pine tree in front of my house. Thinking to encourage it, I supplemented nature’s water supply from the hose. The lichen died. In a casual conversation later, I was told that the chloramine (chlorine plus ammonia) that is added to our water kills invertebrates, and I decided that that was what killed my lichen. Another distressing thought was that the huge brush pile in my backyard that I have been building up for years to encourage wildlife was doubtless loaded with salamanders, worms, and other creatures that breathe through their skin. Although my garden gets little water, I have watered the brush pile a couple of times during the summer to keep my Fuchsia ‘Fanfare’ blooming for the hummingbirds. Bad move. Henceforth it subsists solely on rain.