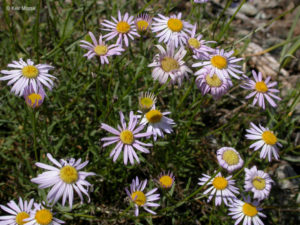 A lot has changed since I sat down to write for the previous newsletter. I’m referring, of course, to the release of the second edition of The Jepson Manual (TJM2; Baldwin, et al., 2012). I picked up mine in January at the CNPS rare plant conference in San Diego. There have been some dramatic changes in the names of many plant genera as well as family assignments, some of which are sure to elicit a collective groan from fans of our native flora. In the interest of not overwhelming you (or me) with too much new information, I’ve chosen as the topic of this quarter’s newsletter a plant that has not undergone any reclassification, in a genus that has experienced only a modicum of change. The species is leafy fleabane and the genus Erigeron.

First, the genus. The so-called fleabane daisies are annuals, biennials and perennials belonging to the sunflower family (Asteraceae) and, if you follow such things, has been assigned to the tribe Astereae. This genus consists of some 375 species (390 according to The Flora of North America) with a nearly worldwide distribution in mostly temperate regions. Of these, 173 occur in North America. TJM2 lists 50 native species (plus 35 varieties) and five non-native but naturalized species. The first edition of The Jepson Manual (TJM1; Hickman, et al.1993) lists 44 native species (plus 36 varieties) and three non-native but naturalized species. The most notable difference between the two treatments is the addition of two taxa formerly assigned to the genus Conyza. The group to which the fleabane daisies belong is distinguished from the other sunflower groups by having radiate heads (inflorescences with both strap-shaped ray flowers and tubular disk flowers) and ray flowers that are white, pink to lavender, or blue-purple. The name fleabane refers to the reputed properties of the genus to repel fleas. The name of the genus is derived from the Greek words eri (early) and geron (old man), referring to plants that flower and have hoary pubescence. The ancient Greeks had some sense of humor!

In California, the native members of the genus range from the widespread horseweed (E. canadensis; formerly Conyza c.), found in 56 of the state’s 58 counties, to seaside daisy (E. glaucus), restricted to the immediate coast but occurring from Oregon to Ventura County, to highly restricted endemics on isolated Sierran and desert mountain slopes. Members of the genus can be found from the coast to the Great Basin, from sea level to over 14,000 feet, and from Oregon to the Mexican border. Of the 85 native taxa known from the state, 29 are listed in the CNPS’s Inventory of Rare, Threatened, and Endangered Plants (List 1A = 1; List 1B = 12, List 2 = 7; List 3 = 1; List 4 = 8); that’s a whopping 34 percent of the California taxa in this genus which are considered rare one way or another!

Now, the subject of this article, leafy fleabane. The species is quite distinct from our other extant native members of the genus. Seaside daisy is a perennial subshrub, with a ground-hugging habit less than 12 inches high, with relatively large inflorescences (0.5-1.5 inches across). Leafy fleabane, on the other hand, is much taller (8-40 inches), with an open branching habit and much smaller inflorescences (0.4-0.6 inches across). The blue ray flowers of leafy fleabane are also fewer in number (15-60, versus 80-165 for seaside daisy). Leafy fleabane might remind you of California aster (Symphyotrichum chilense, formerly Aster chilensis).

There are two varieties of E. foliosus (E.f. var. foliosus and E.f. var. franciscensis). Unfortunately, our chapter records do not differentiate between the two, so I’m uncertain as to whether we have one or the other or both. Although there are vouchered specimens from San Francisco of both on file, there is only one for E.f. var. foliosus, and that collection was made in 1883. This wide-ranging variety is known from most of the southern half of the state, the Central Coast, Sierra foothills and northwestern California; in the Bay Area, this variety has been recorded from Contra Costa, Alameda, and Santa Clara counties. The other variety, E.f. var. franciscensis, is more likely the one found here. It has a much more tight distribution pattern, centered on the Bay Area. Locally collected vouchered specimens include four from San Francisco, two from San Mateo, 11 from Contra Costa, and three each from Marin and Alameda.

According to our chapter’s records and reports from chapter members, leafy fleabane can still be found at the following natural areas: Bayview Hill, Bernal Hill, Corona Heights, Glen Canyon, and above Fox Meadow off O’Shaughnessey Blvd. Jake Sigg reported that he once found it behind the churches on Brotherhood Way, but it persistence there is unlikely. It is also fairly abundant on San Bruno Mountain. There is no record of leafy fleabane from the Presidio.

Leafy fleabane is under consideration for inclusion on our chapter’s list of locally significant plants. According to Randy Zebell of the Natural Areas Program, it seems to be hanging on. Despite the number of natural areas at which it has been recorded, it may warrant inclusion because the remaining populations are small and widely scattered. But the first thing to do is to determine which of the two varieties we have here. If any readers of this column should be so inclined to take a stab at solving this mystery, look for minute but prominent glands on the phyllaries; if present, we’ve got E.f. var. franciscensis, if lacking, it’s E.f. var. foliosus. We’d love to hear about any determinations you make.