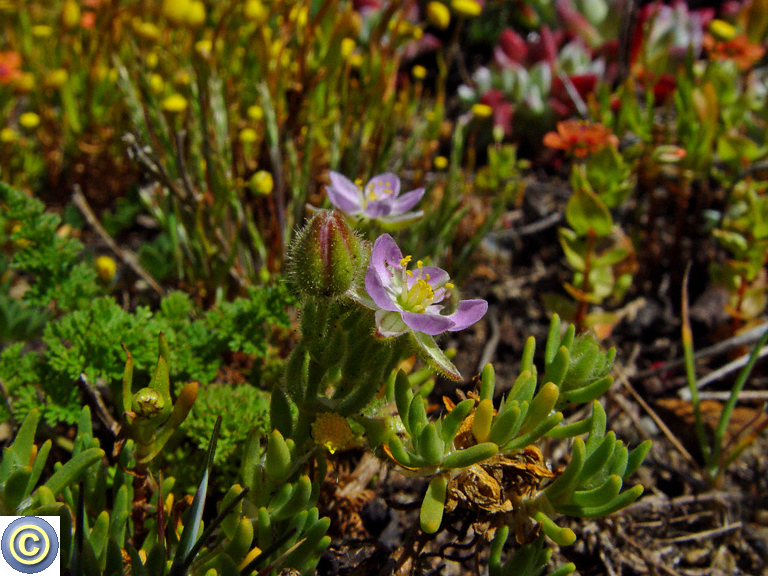 Who doesn’t love to walk along the seashore? To gaze out over the waves toward the horizon? Maybe catch a sunset? Of course, while you’re looking west, there’s likely to be a lot to see behind you. Especially if you are strolling below the bluffs at Land’s End or elsewhere around the Bay. There’s a very unique plant community on the faces and tops of those bluffs not surprisingly known as coastal bluff scrub. While we’ve explored some other coastal plant communities and species in this column, this is one we haven’t touched on yet (check back here next issue). And with winter approaching, an ideal time to experience the scenery and drama of the California coastline, it seemed like a good time to introduce you to the pretty and delicate large-flowered sand-spurrey.

Unlike some of the plants we’ve introduced in this column, large-flowered sand-spurrey is one uncommon species that you’re likely to be able to find and easily recognize. Although this variety also occurs in salt flats, salt marshes, dunes, rocky outcrops, gravelly ridges and alkaline fields, along the immediate coast it can often be found just above the high tide line on sandstone bluffs around the Bay. It is frequently found growing closer to the waterline than any other plants, well within the salt spray zone.

Large-flowered sand-spurrey is a rather stout, prostrate, cliff-hugging perennial. It forms a spreading mat of light- or gray-green stems with fleshy, linear leaves, 1-1.5 inches long, and often arising in axillary clusters. The leaves have conspicuous stipules (paired appendages coming off the stem at the base of the petioles); stipules are dull white to tan, about a quarter of an inch long, with long, acuminate tips. But it’s the eye-catching flowers that really give this plant away. Arising from glandular-hairy inflorescences, the five quarter inch-long pink to rosy petals can cover the mats with color. With alternating green, fused sepals and a spray of yellow-tipped stamens at the center, the flowers look like little star bursts. The prime flowering period is March through October.

At first glance, sand-spurrey might remind you of phlox (Polemoniaceae). But sand-spurrey is a member of the pink family (Caryophyllaceae), also known as the carnation family. The family is found worldwide in temperate regions. It consists of about 3000 species in 89 genera. Economic uses of the family include a large number of widely cultivated ornamentals. The Flora of North America lists 286 species belonging to 37 genera. California is host to about 100 native species belonging to 16 genera including frost mat (Achyronychia), the sandworts (Arenaria, Eremogone, and Minuarta), sand mat (Cardionema), the chickweeds (Cerastium), starwort (Stellaria and Pseudostellaria), pearlworts (Sagina), and catchfly or campion (Silene). Another 75 non-native species have naturalized in the state.

In California, the sand-spurrey genus includes seven native taxa and five naturalized non-natives. There are three varieties of S. macrotheca, but you’ll no doubt be happy to know that along the Central Coast anyway, there’s not much overlap. With the exception of the South Coast, large-flowered sand-spurrey is pretty much restricted to the coast, ranging from Baja California northward to British Columbia. White sticky sand-spurrey (S. m. var. leucantha) is found further inland along the coast, the Central Valley, and the Mojave Desert. Long-styled sand-spurrey (S. m. var. longistyla) is restricted to the inner North Coast Ranges and the Central Valley.

In San Francisco, large-flowered sand-spurrey was known historically from the salt marshes between Hunter’s Point and Bayview Hill, Islais Creek, the Presidio, Point Lobos, Lake Merced, and from the serpentine at Hunter’s Point (Howell, et al. 1958). Of late, it seems to be restricted pretty much to the bluffs at Land’s End and Yerba Buena Island.

Large-flowered sand-spurrey does not appear on any of the CNPS’ lists of rare plants. However, it appears on the East Bay Chapter’s list of Rare, Unusual and Significant Plants of Alameda and Contra Costa County (Lake 2009), where it is listed as a A2 ranked species. This ranking is assigned to species known from three to five regions in the two counties, occur in small populations that are stressed or declining, have a small geographic range, and/or occur in limited or threatened habitats. Given the limited habitat available for this taxon in our chapter area, it is being proposed for inclusion in our chapter’s list of locally significant plants.

So, the next time you’re hiking the trail at Land’s End and enjoying the remarkable views, don’t forget to admire the tenacious plants clinging tenuously to the cliff face. But don’t get too close the edge there… it’s a bit of tumble!