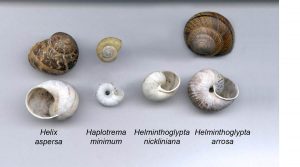 The plant diversity on San Bruno Mountain is staggering considering the acreage: 659 species on about 3,000 acres. But in addition to these plants, we have over thirty species of native ants, at least five species of native bumblebees, and many species of native butterflies, snakes, birds, and amphibians. Keeping with this theme, have you ever thought about our native snails? We have three native species that I want to tell you about and how you can identify them.

The only exotic snail is well known to everyone, the European garden snail, Helix aspersa (Muller 1774). It was brought to America to be consumed by homesick Europeans as escargot. This snail is now a serious pest, causing damage to garden plants by climbing stalks and stems to feast on choice flowers, buds, or leaves. They can lay waste to a garden literally overnight. It is easy to identify this snail by several keys. The shell is about as high as it is wide and is speckled. It has a closed umbilicus-no umbilical hole near the opening. When the snail is mobile it carries its shell sideways-its top to the right or left. The snail’s body is a light brownish-gray and rather large.

Two of our native species belong to the same genus and appear identical at first glance. Since our natives have no common names, we will have to refer to them scientifically. Helminthoglypta arrosa (Binney 1858) has a chestnut-colored shell with a black stripe that runs along the outside. The shell is wider than it is high and the snail itself is almost black. When the snail is mobile it carries its shell topside up. It has an open umbilicus, so there is an umbilical hole near the base of the opening. Its cousin, Helminthoglypta nickliniana (Lea 1838) is identical except that it has a closed umbilicus. Like their European counterpart, both of these snails are herbivores, but unlike the garden snail, they are reducers, happily feeding in the duff and detritus along the ground. Thus they cause no harm to plants.

Our third native snail is a little guy called Haplotrema minimum (Ancey 1888). This species not only feeds in the duff, but also sometimes lives in loose understory. If you are ever pulling Cape ivy (Delairea odorata) under some eucalyptus, chances are you will encounter this snail. Its shell is much wider than it is high and has no markings. It has a wide, open umbilicus and the shell rarely exceeds the size of a nickel. This snail fills one other niche that the other three do not. It is omnivorous, which means that, in addition to consuming plant material, it also eats flesh. When it crosses a snail’s or slug’s mucous trail, it has a special mechanism that allows it to tell which direction the other snail or slug is traveling. It can follow that trail and when it catches up, it can insert itself high enough into a snail’s shell to eat it.

The next time you’re hiking on a cool, overcast morning, keep your eyes peeled for these neat little creatures. When hiking with a group, one of my favorite pastimes is to scan the trail’s edge for snail carcasses and collect one of each. Then I stop the hike and tell everyone about our amazing native snails.