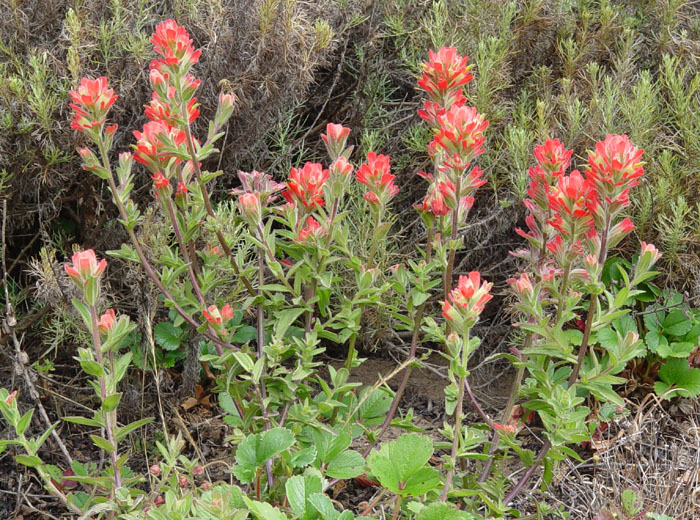 Even still, after all these years of exploring hills and dales, there’s one group of wildflowers of which I cannot resist stopping to photograph. Whether on California’s scenic coastline, in the Sierra or the Mojave Desert, Indian paintbrush always elicits special attention.

Like the subject of my previous column (Mimulus cardinalis), the genus Castilleja has also been separated from the familiar figwort family (Scrophulariaceae). The paintbrushes, along with the bird’s-beaks (Cordylanthus), owl’s clover (Orthocarpus), lousewort (Pedicularis), and Johnny-tuck (Tryphysaria) have been moved to the broomrape family (Orobanchaceae). I won’t pretend to understand the reasons, and I can neither defend nor criticize the wisdom of these changes.

Named after the Spanish botanist Domingo Castillejo (1744-1793), the genus Castilleja is comprised of some 200 species of annuals and subshrubs. Although the above-ground growth of paintbrushes is green and self-supporting, like any proper plant, members of the genus are actually facultative or partial parasites. These “hemiparasites” make parasitic connections to the roots of a wide variety of angiosperm host plants by inserting finger-like projections called haustoria, absorbing water and nutrients. Although some Castilleja species are capable of surviving and reproducing in the greenhouse without a host, they are more vigorous and more likely to flower when a host plant is available.

The genus Castilleja is one of those trickster plants with brightly colored bracts easily mistaken for petals. While these bracts, which subtend the terminal spike-like inflorescences, are commonly bright red, they also come in shades of orange, yellow, purple, violet, rose and even white and green. The actual corollas of Castilleja are typical “scroph” flowers, consisting of fused, bilateral tubes. The irregular tubes have a straight, beak-like upper tip and a much-reduced lower lip with three teeth or swollen pouches. Leaves are alternate, sessile, and entire to deeply divided into long linear lobes.

Except for one Asian species, the paintbrushes are restricted to the New World, with a center of diversity in western North America. As described by Peter Baye, the taxonomy of coastal Indian paintbrush populations is complex (USFWS 2001, see page 111). The notoriously challenging taxonomy of this genus is believed to be due to the tremendous variability within and between populations and a high degree of hybridization and polyploidy, e.g., possessing more than two paired sets of chromosomes. (Chuang and Heckard 1993). California is host to some 68 taxa, including seven federal- and/or state-listed taxa, six on CNPS List 1B, two on CNPS List 2 and five on CNPS List 4. One Marin County species, C. chrymactis, is now presumed extinct.As reported in Howell, et al. (1958), six species of Castilleja were recorded from San Francisco. However, based on revisions of the genus and more detailed study, the list of taxa occurring, or having occurred here historically has changed. Based on a review of the records maintained by the California Consortium of Herbaria, the list of San Francisco taxa includes C. affinis ssp. affinis, C. densiflora ssp. densiflora, C. exserta ssp. latifolia, C. miniata, C. subinclusa ssp. franciscana, and C. wightii. Species that we have in our chapter’s master list of San Francisco species, as well as that for the Presidio, includes C. ambigua, C. exserta ssp. exserta, C. latifolia; the presence of these taxa is dubious. According to Peter Baye, C. latifolia probably does not occur in San Francisco or, for that matter, Marin. Plants found on serpentine here are probably C. subinclusa ssp. franciscana and C. affinis, with C. affinis and C. wightii occurring on our dune remnants. This all serves to point out just how much work is really needed to more fully understand the state of the species present within our chapter area. Perhaps this will all be resolved when the revised flora of San Francisco is published by Cal Academy botanist Tom Daniel… we can’t wait!

In San Francisco, Indian paintbrushes can still be found at Corona Heights (C. densiflora), Glen Canyon (C. exserta), Hawk Hill (C. wightii), Mt. Davidson (C. exserta), O’Shaughnessy (C. exserta, C. wightii?), the Presidio (all of the above-listed taxa), and Twin Peaks (unidentified species). Jake Sigg reports an undetermined species of paintbrush as occurring at Lake Merced. In response to my queries for information during preparation of this article, Doug Allshouse was kind (and curious) enough to make a trip to Hawk Hill to verify that C. wightii is the species present at that location. He reported that it is associated with beach sagewort (Artemisia pycnocephala) and mock heather (Ericameria ericoides). On San Bruno Mountain, it is commonly associated with coyotebrush (Baccharis pilularis). Other common hosts for Wight’s Indian paintbrush include yellow bush lupine (Lupinus arboreus) and seaside woolly sunflower (Eriophyllum staechadifolium).

Indian paintbrush is a wonderful addition to your native plant garden. In addition to attracting checkerpot butterflies, red varieties attract hummingbirds while yellow, green, and purple-flowered paintbrushes attract bumblebees. Various species can be found at our local native plant nurseries. Just remember to plant them along with a host plant or two.