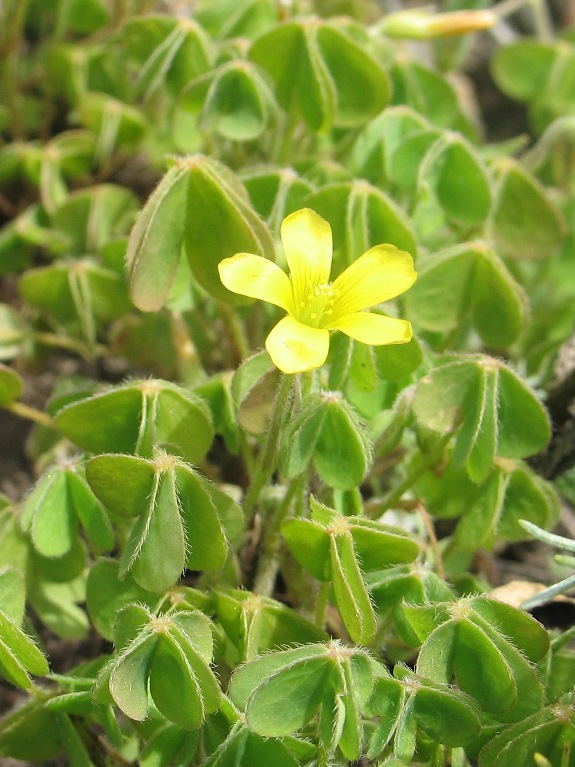 If you garden in San Francisco, or just about anywhere in the western U.S., you’re likely familiar with Oxalis. A popular potted plant in its own right, the genus includes many species of weeds that appear spontaneously in potted plants and lawns. Growing up in the nursery business, I recall very clearly weeding potted plants full of creeping woodsorrel (Oxalis corniculata) and having its seed pods explode in my face. At least eight non-native species of oxalis may be encountered in our local gardens, although most are rarely found outside of cultivated areas. Still, a few species have naturalized in California. Aside from creeping woodsorrel, perhaps none is more notorious along the Central Coast than Bermuda buttercup (O. pes-caprae). Also known as sour grass, for its lemony-tasting peduncles, Bermuda buttercup is an aggressive weed on moist, loamy slopes near the coast, forming dense, lush green patches in the spring, dying back to copious numbers of buried bulbs when the rains cease.

The oxalis family (Oxalidaceae) is distributed across the tropics, subtropics and temperate regions of North and South America, Africa, Europe and Asia. The family consists of only five genera with around 880 species. In addition to “lucky clover” AKA “four-leaf clover” (Oxalis tetraphylla), is the sensitivity plant (Biophytumspp.), whose leaves fold up when touched.

The genus Oxalis is the only member of the family represented in California and the continental United States. Members of the genus are characteristically herbaceous annuals or perennials with fibrous or woody roots, often producing bulbs, tubers or rhizomes, with palmate leaves with three small leaflets (arranged in a typical “clover” fashion). Flowers consist of five clawed, radial petals ranging from yellow to white to purplish or pinkish. Fruits are a narrow capsule described as “explosively dehiscent”. The sour taste of Bermuda buttercup and other members of the genus is due to the presence of oxalic acid, which is also found in spinach, broccoli, Brussels sprouts, grapefruit, chives and rhubarb. In very large amounts, oxalic acid is considered slightly toxic and can interfere with digestion and kidney function. Interestingly, some members of the genus are known hyperaccumulators of copper, notably, O. corniculata, which was described in Chinese texts from the 1400s as an indicator of copper deposits.

Of the ten species of oxalis listed in the second edition of The Jepson Manual (Baldwin, et al. 2012), five are native and the other five are naturalized non-natives. Only a single member of the genus (O. suksdorfii, CNPS List 4.3) in California is considered to have special-status as a rare plant. Six of these plus an additional garden escape are extant in San Francisco (Wood 2013). In their Flora of San Francisco (1958) Howell, et al. describe six species of oxalis are described; but only one, hairy woodsorrel, is indigenous to San Francisco

Hairy woodsorrel (previously named O. albicans ssp. pilosa) is a perennial herb forming an erect to decumbent stem up to 15 inches long developing from a more or less woody taproot. As the name indicates, plants have dense hairs along the stems, leaflets, and pedicels. Inflorescences produce 1-3 flowers in umbel- or raceme-like cymes at the end of 1 inch-long pedicels. The yellow, half inch-long flowers appear from February through September.

A denizen of coastal grasslands, scrub and chaparral habitats below 2000 feet in elevation, hairy woodsorrel has been collected from coastal counties from San Diego to Humboldt. In their 1958 flora, Howell, et al. cite as locations for hairy woodsorrel the Presidio, Golden Gate Park, Sutro Hill, Laguna Honda, Lake Merced, Twin Peaks, Mt. Davidson, San Miguel Hills, and Bayview Hill. It is presumed to have been extirpated from the Presidio (Frey and Stevenson 2010). Currently, hairy woodsorrel has been reported from Bayview Hill, Bernal Hill, Brooks Park, Laguna Honda Reservoir, McLaren Park, Mt. Sutro and Twin Peaks (Wood 2013). While it is known from seven localities, it tends to persist as only very few plants, making it a strong candidate for inclusion on our upcoming revised list of locally significant plants. Hairy woodsorrel has no status as a CNPS-listed species nor is it included on the state’s list of special plants.

Hairy woodsorrel is easily confused with the non-native creeping woodsorrel, an introduction from the Mediterranean region. In fact, hairy woodsorrel was once regarded as a subspecies of O. corniculata. This fact is significant as hairy woodsorrel may be simultaneously underreported here and more seriously threatened. The native and non-native plants can be distinguished as follows: Hairy woodsorrel is found primarily in undisturbed sites, has stems that do not root at the nodes, and has petals that are 8-12mm (0.31-0.47 in) long. Creeping woodsorrel is found in mostly disturbed sites, has stems that root at the nodes and has petals that are less than 8 mm (0.31 in.) long. Neither species produces bulbs; hairy woodsorrel produces a woody taproot while creeping woodsorrel produces a fleshy taproot. I don’t recommend that you rely on this trait to identify plants in the field if you’re uncertain, as it of course requires that you pull the plant out to make the determination. As I always say, that’s how you identify a plant that USED to occur at a site.

This would be a great target for future “rare plant treasure hunts”. I would be especially interested in learning of its status at any of the historical locations listed above. If you should find and be able to make a positive, reliable identification, I’d love to hear.