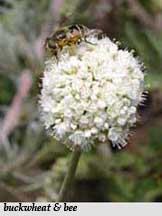 When I planted my first native plant garden at City College of San Francisco, all I was thinking about were the plants. I grew a selection of coastal prairie plants and installed them in a decorative landscape scheme, with little signs and mulch in between. Problems occurred immediately. For some reason, the mulch kept disappearing as fast as I could replace it, and the signs were usually found knocked over. Then I got there early one morning and saw the cause of this dishevelment.

All the mulch had been meticulously kicked off the site by robin-sized towhees, who were now racing about the site, kicking at the ground for food. Behind them, mourning doves sat like Aztec sculpture, contemplating the bare ground. A nearby blank spot in my planting scheme turned out to be a heavily-used takeoff and landing approach for sparrows, mockingbirds, scrub jays, blackbirds, and more.

It occurred to me that by removing the weedy overburden of wild mustard and oats, I had opened up the area to the birds. I could see how much they need to interact with the ground, free of lawns, parking lots, and “landscaping.”

At another site on Corona Heights, I “pioneered” a small garden out of a nearly pure stand of French broom. As I slew the broom and established the local grasses and perennials, I was always accompanied by the bluish form of the resident scrub jay, carefully inspecting my work. I did find a native morning glory on the site, as well as a well-established coast live oak, which puzzled me because I couldn’t see any oaks nearby. As seasons progressed, I found several oak seedlings on the site. Then one day I saw the scrub jay with an acorn in its bill. These were his oaks; he’d planted them all. As the acorns mature each year, the scrub jay flies them off by the thousands, installing them in the landscape. With this in mind, I now realize my true role as scrub jay’s assistant in this new oak grove.

As you may know, one basic rule of pest control is to stop infestations before they get out of hand. So when I spied the caterpillar chewing on a coastal buckwheat flower, my hand shot out to grab it. My hand stopped in midair. What kind of caterpillar was it? Angular and densely built, it didn’t look at all like a cabbage worm or cutworm. Then I remembered the butterfly lists of host plants. Butterflies need to be caterpillars first, and native butterfly larvae might be currently eating my native plants. In that case, “Help yourself,” I said.

Weeks later the caterpillar was gone, I hope enjoying the rigors of metamorphosis. And the coast buckwheat had little damage to show for the support it had given to the caterpillar, no ugly damage or shot-holes on the leaves. Later I read that some native butterflies pupate in the ground, sometimes for years, until conditions are right to reemerge. So watering or mulching around there wouldn’t be doing the butterfly any favors either.

At the Garden for the Environment at 7th Avenue and Lawton Street, gophers ran riot. The situation was beyond my scope, and my once pristine-looking coastal grassland plot grew pits and mounds as the plants disappeared. Some plants did pretty well, but the bulbs and smaller plants were really taking a hit. I sat eating lunch watching the devastation, thinking about how it makes sense that native plants might end up in the stomachs of native gophers. What could I do about it anyway?

As I pondered, out of the corner of my eye I saw a brownish shape descend to the path next to the garden. It was a full-sized hawk which had just seized a gopher. The hawk flew up to a nearby telephone pole and ate with the joy of a hunter who’s having an excellent day. I looked back at the garden and again at the feasting raptor and thought, “How do we measure the success of a garden anyway?”