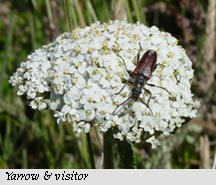 My yard is beginning its third spring as a native plant restoration experiment. A few years ago I moved to a house in the Sunset District blessed with a neglected yard and a landlord who didn’t care what I did, as long as I didn’t ask him to help. I started, with the help of many friends, to cut back more than 20 years growth of mirror plant (Coprosma) and Himalayan blackberry, chopping, yanking, and swearing while progressing toward the back corner of the yard. Along the way we uncovered a stone walkway complete with two terraces, several engine blocks, and innumerable unidentifiable rusted car parts. Spurred on by these achievements, I descended upon our Yerba Buena Chapter’s first native plant sale.

Thus began the experiment. It turns out that my yard, and I suspect many a Sunset yard, is amenable to local native plants. The soil is mostly sand overlain by a foot of clayish top fill. The sand provides excellent drainage, which most natives prefer. It’s not very hard to dig through the clay layer, provided it’s still moist, and mix it with some of the sand to ensure drainage. My yard slopes westward, which provides fog and wind exposure, bad for tomatoes but good for locally adapted native plants. Coyote bush, poppies, scorpion plant, lupine, yarrow, yerba buena, columbine, and purple needlegrass are all thriving. The yard is now chock-full of insects and birds.

If you find yourself wondering whether you have what it takes to grow native plants, stop wondering and just do it. Native plant gardening can be started on a small scale with very little effort, and can reap substantial rewards as you become more in tune with nature’s cycles, processes, and inhabitants. The following list of do’s and don’ts will promote biodiversity in your very own backyard.