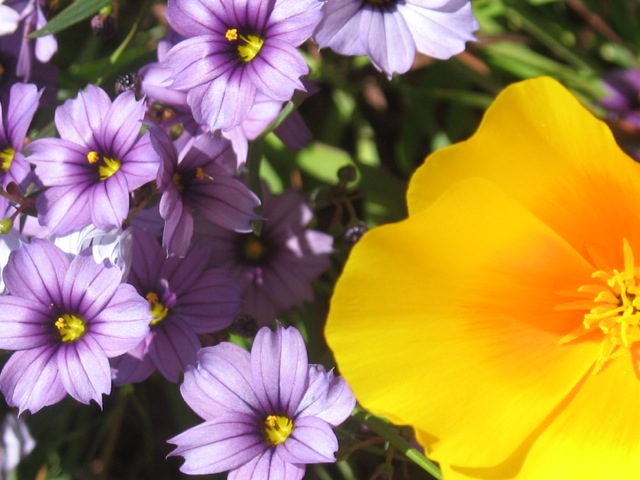 Fred Rinne is a chapter member who gardens in and observes a 15- by 50-foot test garden on the campus of City College of San Francisco. Fred first shared his insights with us in the December 1995 newsletter.

A garden is a conversation. You state your intent, your planning. You shape and plant. Then the land answers back with its own intents and desires. Are you listening?

Some time ago, I planted a native meadow selection of grasses, perennials, and annuals on the standard perennial border design, with plenty of room between the plants. They did terribly.

Months passed, and it was only when the plants grew intermingled and “found each other” that they grew bigger and more vigorous. Yarrow (Achillea millefolium) shaded the roots of the Douglas iris (Iris douglasiana), which leaned into the varied lupine (Lupinus variicolor). It wasn’t at all what I had planned, but the plants looked great.

It gradually dawned on me that, since these plants coevolved in the same geographic area (Franciscan grassland), they did not compete against each other but cooperated to form a community.

This made me step back ten paces from my background in horticulture. From long ago, we learn to separate the shrubs from the groundcovers, separate the shrubs from each other, prune to define shape, edge, mow. This is all necessary because the plants in the standard landscape are as alien to each other as to this bioregion. The South African vines, the Chilean trees, and the New Zealand shrubs are going to need some help in getting along.

We have many fine examples of our native plant communities from which to learn. Simply choose a site and return throughout the year. There is much to be learned by following one setting through the seasons and becoming acquainted with the interactions among the plants.

I stress flexibility in the landscape to be planted, because on native undisturbed sites, as in your garden, each year is different. You don’t get the same thing every year. One spring you might see hundreds of a certain kind of flower, the following spring perhaps a few.

On one test plot I put the community idea to a vigorous test, planting it with yarrow, Aster chilensis, Douglas iris, and a toyon (Heteromeles arbutifolia). The first spring had me worried because of the invasiveness of the yarrow, and because the aster was five feet tall and sending out runners everywhere. “What have I done?” I mused as the bed grew cloaked with rampant growth.

I found comfort in reflecting that I had never seen valleys full with Aster chilensis or great fields of yarrow. There must be some reason for this. Sure enough, a few seasons later the yarrow is occasional polite little tufts, the aster comes up at a sedate two feet tall, and there is plenty of room for the other plants on the site such as the toyon, now six feet tall and unstrangled. I can’t prove it, but I feel some sort of equilibrium was reached between these natives who know how to act around each other.

I’ll add more grasses this fall, and tarweed and annuals. But the land will decide what will go into this mix and what will not, and each season will be different, no matter what I plan. And I like that about our native plants, the way they stand apart from our preconceptions. It’s that quality we call wildness.