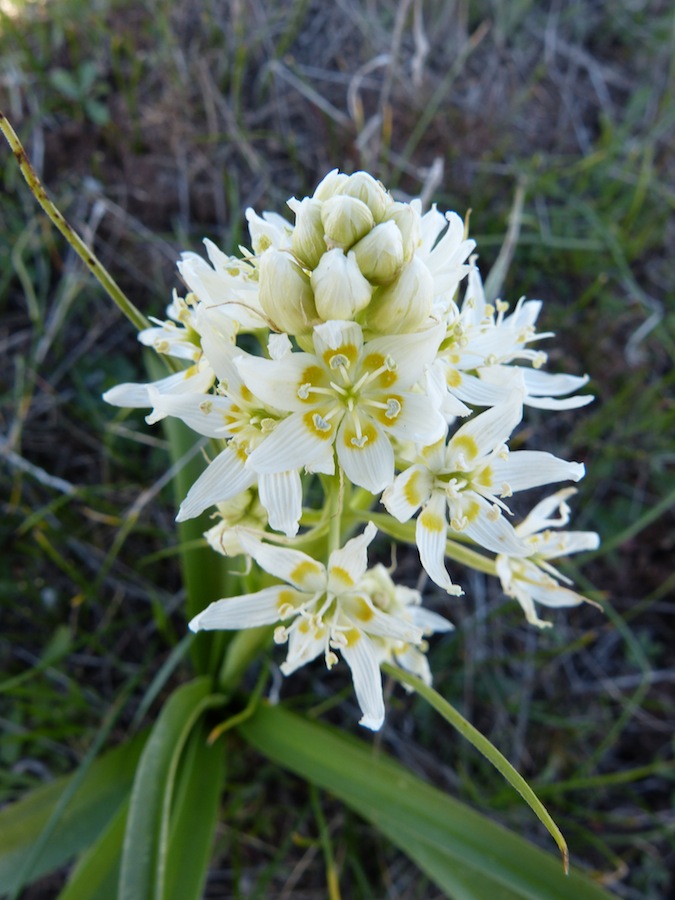 If you’ve never heard of Fremont star lily, you probably won’t be bothered by the taxonomic changes it has recently undergone. Known as Zigadenus fremontii in the lily family (Liliaceae) in the 1st edition of The Jepson Manual (TJM1; Hickman 1993), Fremont star lily is now known as Toxicoscordion fremontii and has been placed in the false-hellebore family (Melanthiaceae) in the 2nd edition of The Jepson Manual (TJM2; Baldwin, et al. 2012).

I hardly know where to start to bring you (and me) up to speed on these changes. Of course you recall that the lilies and their associates are monocots (true flowering plants that produce only a single “seed leaf” (cotyledon), typically with parallel leaf veins and flower parts in multiples of three). In TJM2, the lily family in California has been divided into new (or restored) families such as Agavaceae (Agave, Yucca, Chlorogalum, Camassia, et al.), Alliaceae (Allium, et al.), Asparagaceae (Asparagus), Asphodelaceae (Aloe, et al.), Melanthiaceae (Toxicoscordion, Trillium, Veratrum, Xerophyllum, et al.), and Nartheciaceae (Narthecium). Remaining in the Liliaceae are Calochortus, Clintonia, Erythronium, Fritillaria, Lilium (thank goodness for that!), Prosartes, Scoliopus, Streptopus and Tulipa. Based on DNA studies published in 2002, it was determined that members of the genus Zigadenus properly belong to Toxicoscordion, a resurrected name.

Now that that’s out of the way, you’re probably asking what makes the star lilies stand apart from true lilies (if you haven’t asked yourself that, you may skip to the next paragraph). To answer this, I had to go back to the keys in TJM1. In short, the lilies all have cauline leaves (leaves arising from the above-ground stems), flowers are bisexual (possess both male and female parts) and lack a distinct glandular area on the flower petals. The members of the Melanthiaceae may have cauline or basal leaves (leaves arising from the base of the stem, at or below ground level), flowers are either male or female, and all have distinct glands near the base of the petals. Plus, they look differentâ€¦.it’s a gestalt sort of thing.

The Melanthiaceae includes some 130 species in ten genera found in the northern hemisphere. The genus includes 18-22 species ranging from North America, Central America, Japan and eastern Siberia. The updated taxonomy for Zigadenus is not reflected in The Flora of North America, which lists 14 species restricted to the western U.S., Baja California and Oregon. According to TJM2 lists, there are seven species native to California.

Fremont star lily is a perennial geophyte, a term that refers to the plant’s underground rhizomes or small odorless onion-like bulbs that function as storage organ. Leaves are linear, folded, curved and reduced as they progress up the stem; they are usually deciduous after one year. Flower petals are yellow to white, in sixes, with greenish-yellow glands near the base. Inflorescences look like an array of stars arranged around the erect stems up to 15 inches tall. The unbranched flower stalks arise in early spring, flowering in March through May. It is thought that the toxicity of this group may extend to the flower nectar, which would represent an ecological filter, limiting the species of insect pollinators that can avail themselves of the plant’s food resources. Pollination is thought to be accomplished by a variety of syrphid and stratiomyid flies and solitary andrenid bees.

Some members of the genus are known by the intriguing epithet “death camas”. As you might have presumed, these plants are indeed toxic. The plant parts contain alkaloids that are toxic to both humans and livestock. All fresh plant parts (leaves, bulbs and flowers) are toxic; dried plant parts, especially the seeds and capsules are even more toxic. Consuming 2-6% of body weight is a fatal dose. The scientific name of the genus is derived from the Greek for “poison garlic”. The term “camas” comes from the Shoshone name for the edible camas root or blue camas flower (Camassia spp.), a closely related (and edible) genus in the Agavaceae.

T. fremontii has been recorded in 34 of California’s 58 counties, stretching between the borders of Baja California to Oregon, and from the coast to the western slopes of the Sierra Nevada below 3500 feet in elevation. Unlike the ever-so-ephemeral fritillaries, Fremont star lily is not quite so subject to herbivory, although despite its toxicity, the nibbled tops of early inflorescences can be observed. Still, you’re more likely to happen upon a colony of Fremont star lily in full flower when surveying our local grasslands and chaparral patches. It is extant in all eight of the Bay Area counties.

Historically, in our chapter area, Fremont star lily was known from the southeastern corner of the county and the Presidio’s serpentine grassland. The last collection from the Presidio was made in 1896, although there is a reference to a collection made by Peter Rubtzoff in Howell, et al. (1958). Michael ChassÃ© of the National Park Service reports that the species is thought to be extirpated from the Presidio. Fremont star lily can still be found on the eastern side of Bernal Hill where chapter member and Natural Areas Program staffer Rachel Kesel has been keeping track of the population; she counted 72 flower stalks last year. Dr. Michael Vasey reports that the plant can be found in abundance on San Pedro Mountain in Pacifica as well as other ridges of northern San Mateo County, and chapter member Doug Allshouse reports that it is abundant on San Bruno Mtn. in Buckeye and Owl canyons. Chapter records also have it occurring in Glen Canyon (confirmed by Dr. Tom Daniel at Cal Academy) and at McLaren Park (I was not able to confirm this record).

Of the seven California taxa, one (T. micranthus var. fontanus; now T. fontanum) appears on the CNPS Inventory of Rare and Endangered Plants (available online at http://rareplants.cnps.org). Fremont star lily is neither regionally rare nor does San Francisco lie at the edge of its distribution. However, given its highly restricted occurrence in the county and the fact that it has been extirpated from part of its historic range here, it is being considered for addition to the Chapter’s list of locally significant plant species.