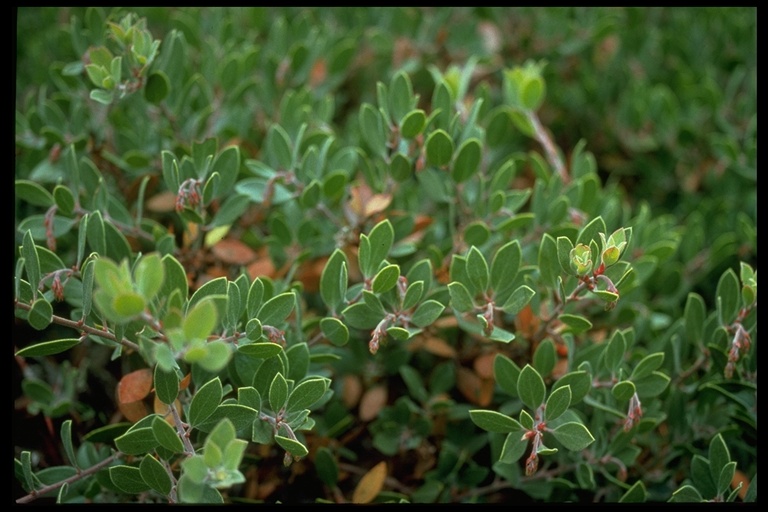 In previous articles, we’ve had the opportunity to pass on exciting news regarding the discovery in San Francisco of botanical treasures long lost or seldom seenâ€”yellow mariposa lily in a Hunters Point neighborhood, fiesta flower and dune gilia on Yerba Buena Island, San Francisco collinsia and California saxifrage on Bayview Hill, to name a few. We’ve used these occasions to emphasize that there are still discoveries to be made in this metropolis, citing them as examples of the surprisingly rich biological diversity of our remaining natural areas and as a rationale for their preservation and management. But these discoveries never made the papers and none can compare with the earth-shattering news of the rediscovery of Franciscan manzanita, a plant thought extinct in the wild for nearly 70 years.

Last seen in the wild in 1947 and maintained only in cultivation, a single wild plant of Franciscan manzanita was discovered this past October in the Presidio. Hidden by overgrown vegetation, the plant was exposed when trees and shrubs were cleared to make way for construction of the Doyle Drive replacement project. It was found by Dr. Dan Gluesenkamp, Director of Habitat Protection and Restoration at Audubon Canyon Ranch, who spotted it while driving home and informed his colleagues at the Presidio. As soon as they crossed the highway to take a closer look, the Presidio’s ecologists knew they had something special. And while its true identity won’t be confirmed until DNA analysis is complete, the two people most qualified to hazard a guess, San Francisco State University scientists Dr. Thomas Parker and Michael Vasey, believe the specimen to be the long-lost Franciscan manzanita.

The genus name Arctostaphylos is combined from the Greek words for “bear” and “grape cluster”; the common name, manzanita is Spanish for “little apple.” It belongs to the heath family (Ericaceae), which includes azaleas and rhododendrons, madrone (Arbutus menziesii), salal (Gaultheria), and huckleberry (Vaccinium), among others. Typically associated with acidic substrates, the family is widely distributed in North America, Europe, and Asia, as well as the tropics of South America and New Guinea, and in southern Africa. The manzanitas include 62 species and at least 30 subspecies or varieties. Although its main center of diversity is along the central California coast, members of the genus are also found in Mexico, Central America (Guatemala), Europe, and Asia. Typically known for their smooth, burgundy-red bark, the manzanitas vary from prostrate, mat-forming plants to large shrubs or trees approaching 30 feet tall. The combination of dry summers and winter rainfall, frequent fire, and a diversity of soil types have likely contributed to the spectacular diversity of manzanita species in California.

The Franciscan manzanita (formerly named A. hookeri subsp. franciscana) is a low-growing, spreading shrub associated primarily with outcrops of serpentine or other ultramafic rock. The legendary botanist Alice Eastwood first described Franciscan manzanita as a unique species in 1905. Eastwood and others collected from a scattered population of Franciscan manzanita along the edge of a serpentine quarry in the Laurel Hill Cemetery. The area is now occupied by the Laurel Hill Playground, where one can still see traces of serpentine rock along its edges. The Franciscan manzanita also formerly occurred at Masonic Cemetery and on the windswept greenstone slopes of Mt. Davidson. It grew with Raven’s manzanita in all three locations, and possibly others, until being lost to developmentâ€”but not before a number of horticulturists, including James Roof and Lester Rowntree, salvaged some of the original specimens, just ahead of the bulldozers. The Franciscan manzanitas of Laurel Hill are preserved at several botanic gardens, including the Regional Parks Botanic Garden at Tilden Park in Berkeley and the San Francisco Botanical Garden at Strybing Arboretum. These institutions deserve much credit and thanks for preserving the original Laurel Hill genotypes.

At the same time as Franciscan manzanita was being driven from Laurel Hill Cemetery, bulldozers were at work in another part of town. The construction of Doyle Drive in the late 1930s scraped through the Presidio’s serpentine headlands, fragmenting the wildflower-studded “mesa” first described by the Spanish colonists upon their arrival in the area. Ironically, these destructive forces likely provided for the renewal of a dying species by stimulating seed lying dormant in the soil to germinate. As cars passed by on their way to the recently completed Golden Gate Bridge, a manzanita emerged unnoticed along the top of a serpentine roadcut. Here it grew on a remarkably small patch of ground surrounded by highway ramps and roadways. Australian tea tree (Leptospermum laevigatum) and other exotic plants eventually over-topped their low-growing neighbor. This one plant managed to evade detection by contemporary botanists who over the years found a number of rare species in nearby fragments of serpentine prairie. But they missed the biggest prize of all, until a series of serendipitous events this past October led to the greatest manzanita discovery since 1952, when Dr. Peter Raven rediscovered the shrub first identified by Kate Brandegee in 1892, Raven’s manzanita (A. hookeri (renamed montana) subsp. ravenii.)

The excitement over the recent discovery of Franciscan manzanita has been slightly tempered by its extremely vulnerable location within the Doyle Drive reconstruction corridor. Fortunately, a network of experts came together immediately after its identification to consider every possible option for its conservation, as well as providing for the eventual recovery of the species. Various federal agencies and manzanita authorities worked with CalTrans to develop a conservation plan that includes its propagation by cuttings, rooted stem layers, and seeds; seed bank salvage and germination; and the movement of the “parent” plant to a suitable (and secret) protected natural area in the Presidio. In the meantime, specialists in manzanita propagation are growing cuttings at botanic gardens and native plant nurseries to safeguard the genotype and to provide source material for subsequent plantings. Coincidentally, co-author Michael Chasse has been working on a graduate studies project at San Francisco State University to analyze the prospects of establishing multiple viable populations of Franciscan manzanita on the northern San Francisco peninsula. The combination of ex situ conservation and maritime chaparral restoration may provide this species with a brighter future than could have ever been imagined over half a century ago.

Although the Franciscan manzanita was once a candidate for inclusion on the federal endangered species list, it was never listed because no natural populations remained. But with this discovery, an emergency petition for listing under the Endangered Species Act has been filed by the Wild Equity Institute, the Center for Biological Diversity, and the California Native Plant Society. The species has been on the CNPS List 1A, indicating that it is presumed extinct. A proposal has already been made to change its status to List 1B.

In reading the local newspapers, you may have been amazed about all the excitement generated by the discovery of Franciscan manzanita. You might even have chuckled to yourself, thinking something like, “Oh, those crazy botanists get so excited about such little things.” But if you’re a regular reader of this column, perhaps you can appreciate the remarkable diversity of plant life that can still be found in San Francisco, and perhaps you are at least a little excited that there is still the chance to discover new and unique species growing right under our noses. Have an adventurous spring!

Responding to a petition filed by the Wild Equity Institute, the U.S. Fish and Wildlife Service has secured funding to start the Endangered Species Act protection process for the Franciscan manzanita in 2010. The individual plant has already been moved to a more secure home in the Presidio of San Francisco, and, with the help of the Endangered Species Act, recovery efforts for the entire species can begin in earnest.