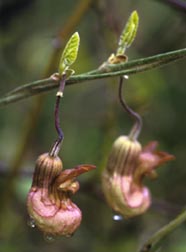 An interesting and not-so-obvious native vine is Dutchman’s pipe. Also called California pipevine, this species is most recognizable by its one- to six-inch long, heart-shaped, and somewhat fuzzy leaves. It is found vining on the ground and up into adjacent trees and shrubs. It is usually associated with oak woodlands and redwood forests in riparian settings, although I have found it growing in full sun in grasslands (albeit near an unvegetated creek channel). It also occurs infrequently in chaparral and foothill woodland.

The common name refers to the similarity between the blossom and an old-fashioned Meerschaum pipe. The flower, which lacks petals, actually consists of a fused calyx forming a u-shaped, upturned and somewhat inflated tube. The tube itself is mottled or striped greenish and brownish-purple, and is one to two inches long. In many ways, the flowers appear very similar to those of the vining pitcher plant Nepenthes, found in southeast Asia. In our area, flowering occurs from January through April. You can consider yourself fortunate if you see this vine in flower, for its blossoms are short-lived and quickly disappear.

Dutchman’s pipe is a member of an unusual plant family, Aristolochiaceae. Belonging to the Order Aristolochiales, this group is something of an evolutionary outlier of the Subclass Magnoliidae, which includes the buttercups, laurels, poppies and magnolias. Worldwide, the pipevine family consists of only seven genera and about 625 species. It occurs in tropical to temperate regions of the Americas, Africa, and Eurasia. Although its distribution extends to Indonesia, it does not occur across the Wallace Line or into Australasia. Only two genera of this family are native to California, the other being Asarum (wild-ginger).

Many species of pipevine are cultivated for their curious flower shapes and attractive foliage. The family and generic names are derived from two Greek words-cristos and locheia,meaning “noblest” and “childbirth,” referring to its purported medicinal properties. The roots and stems of most members of the genus are toxic. Plants in this family contain aristolochic acid, which has received rather mixed reports on its toxicity. According to one report, aristolochic acid stimulates white blood cell activity and speeds the healing of wounds. But it is also carcinogenic and damaging to the kidneys. Traditionally it was chewed in minute doses or used as a weak tea to promote sweating, stimulate the appetite, and promote expectoration. It has been used to treat toothache by placing bits of bruised root in hollow teeth. An extract of the root has been drunk to relieve stomach pains, and the boiled root, or a decoction of the whole plant, has been used to treat fevers. It must be used with caution, as it is irritating in large doses. The chewed root or crushed leaves of Aristolochia tomentosa was one of the most popular remedies for snake bites in North America, hence one of its common names, American snake-root. Aristolochic acid is currently being tested as a cancer-fighting compound.

In the Bay Area, Dutchman’s pipe is probably most noted for its significance as a host plant for the pipevine swallowtail butterfly (Battus philenor). It is the only native food source for caterpillars of this species. The pipevine swallowtail butterfly has black wings with blue markings and a wingspan of two-and-a-half to four inches. Females have less blue and bigger pale spots on their wings than males. Pipevine swallowtails are also distributed throughout most of the eastern United States, the southwest, and into Mexico. Because Dutchman’s pipe is poisonous to vertebrates, adult pipevine butterflies are poisonous to birds and other predators. In an evolutionary phenomenon called Batesian mimicry, the coloration of pipevine swallowtails is copied by other butterflies such as spicebush swallowtails (Papilio troilus), female black swallowtails (P. polyxenes), black-form female tiger swallowtails (P. glaucus), and females of the species Speyeria diana and Limenitis arthemis astyanax. Such mimicry announces to potential predators that these species are to be avoided, even though, in reality, they do not feed on toxic plants and therefore are not poisonous.

Aristolochia californica is endemic to California; it is entirely restricted to the state. It occurs along the coast from Monterey County to Humboldt County, inland in the Bay Area, and extending northward through the Sacramento Valley and into the northern foothills of the Sierra Nevada. In San Francisco, it has been recorded historically from Strawberry Hill and elsewhere in Golden Gate Park, Lake Merced, and Laguna de la Puerca (now known as Pine Lake). Extant populations can be found at Strawberry Hill and Lake Merced. I have recorded about seven new populations on Yerba Buena Island. Nearby, it occurs at numerous locations on San Bruno Mountain, Angel Island, Marin County, and the East Bay.