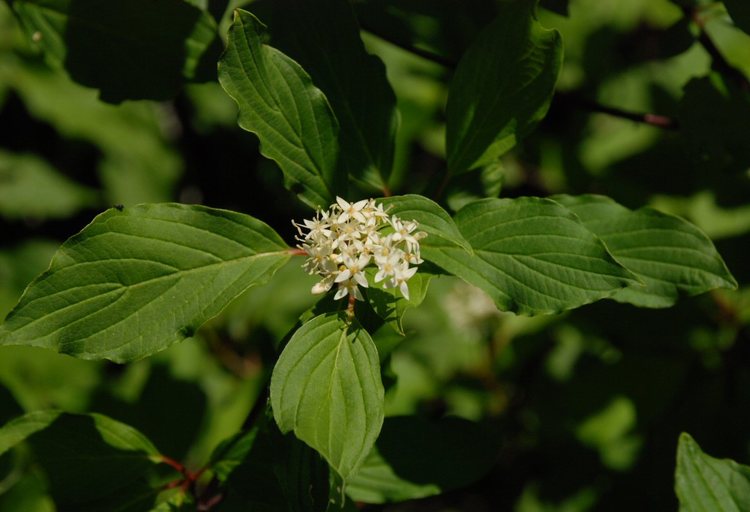 If you’re a gardener or a transplant from east of the Mississippi, when you reminisce about spring, you probably think “dogwoods”. Cultivars of eastern dogwood (Cornus florida), with their showy flower bracts, are widely planted in parks and along avenues throughout the East and Midwest. Naturally occurring stands of eastern dogwood occur from southern Maine to northern Florida and west to southern Ontario, Illinois and Kansas. But it should come as no surprise that California is also host to several taxa of dogwood, albeit not quite as ornamental as the more showy cultivars.

The dogwoods belong to the dogwood family (Cornaceae). The family includes about 110 species of mostly trees and shrubs in around 12 genera. It is widely represented throughout the northern temperate zone but also reaching into the tropics south of the equator, showing up on the continents of North and South America, Europe, Asia and Africa. The family has even spread through Southeast Asia as far as Wallace’s Line (an ecological boundary between Southeast Asia and Australia created by the deep straights separating Borneo and New Guinea). This barrier to dispersal apparently prevented the family’s spread into Australia.

The genus Cornus includes about 50 species found in temperate and boreal Eurasia, China, Japan and North America. The name is derived from the Latin word for horn (cornu), referring to the plant’s hard wood. It is the only member of the family occurring in California. California supports five species and two subspecies of deciduous dogwoods. Although reaching as far south as the Transverse Ranges and Peninsular Ranges of southern California, our native dogwoods are most commonly encountered in the Central and North Coast Ranges, the Sierra, and the Klamath and Cascade Ranges.

In their Flora of San Francisco (Howell, et al. 1958), three species of dogwood had been reported from the City, including creek dogwood (C. californica [now C. sericea]), brown dogwood (C. glabrata), and mountain dogwood (C. nuttallii). Of these, it appears that we’re down to just one, creek dogwood.

Cornus sericea is divided into two subspecies (C.s. sericea and C.s. occidentalis) with overlapping ranges. The former, commonly known as creek dogwood, American dogwood and red osier dogwood, has leaves that are glabrous above and strigose beneath. The latter, known as western dogwood, has leaf undersides that are densely rough-hairy. Although records for both subspecies exist, it is presently thought that only C.s. ssp. sericea occurs in San Francisco. Creek dogwood is a shrub reaching up to 12 feet in height and generally associated with moist habitats below about 8200 feet in elevation. It is distinguished from our other dogwoods by the lack of petal-like bracts, and by having leaves 2 to 4 inches long with leaf veins in 4 to 7 pairs. Flowers develop in strigose cymes (a flat-topped or round, determinate inflorescence with stiff, straight appressed hairs). The blossoms themselves consist of white petals Â¾ to 1Â¾ inches long. Flowering occurs from April through June. Fruits are small whitish drupes (think cherry) about a quarter of an inch long.

Historically, creek dogwood was locally common in marshy spots and along streams at Lobos Creek, in Golden Gate Park, and in the gully east of Lake Merced (Howell, et al. 1958). The Presidio is the type locality for the subspecies, meaning it is the location of the material collected from which the taxon was first described. It is also present on San Bruno Mountain where its extent has been greatly reduced by development and quarry operations, but is extant along Colma Creek.

According to Randy Zebell of the Natural Areas Program (NAP), the natural stand of creek dogwood in that gully east of Lake Merced, along what is now Brotherhood Way, is doing just fine. Michael Chasse, Natural Resource Management Specialist with the Golden Gate National Recreation Area (GGNRA), reports that remnant patches of creek dogwood at Lobos Creek are expanding with the removal of Cape-ivy (Delairea odorata) and their ongoing revegetation efforts. Outside of the city limits (but under the City’s control), creek dogwood forms extensive stands at Sharp Park. These stands are the source of much of seed collected by the NAP and used for restoration projects at Glen Canyon, McLaren Park, Pine Lake, and Lake Merced, where it has successfully established itself.

Creek dogwood is hardly rare (it has been recorded in 53 of California’s 58 counties), and it is quite common to the south in San Mateo, Santa Clara and Monterey counties, and to the north in Marin and Sonoma counties. However, because it is typically restricted to moist habitats such as streams and marshy areas, a rare commodity in San Francisco, it has earned a place on our list of locally significant species. Fortunately, the ongoing restoration efforts of the NAP and GGNRA are enhancing natural stands and expanding the range of creek dogwood, helping to preserve our chapter area’s remarkable botanical diversity for future generations. If you’d like to do your part, try planting this handsome native shrub at a moist location in your garden. With its medium green foliage and reddish to purplish branches and small but showy clusters of white flowers, it would surely be a welcome addition.