As my wife and I continue our travels, most recently around Andalucia, southern Spain and currently in Provence, southeastern France, we’ve seen vast stands of common reed. I have often wondered about the status of common reed as a California native species, given that in other parts of the country it is regarded as a highly invasive species. This is more than just an academic question as it is considered a locally significant species in our chapter area.

Common reed is the quintessential cosmopolitan plant, occurring on every continent except Antarctica. It is considered one of the most widespread seed plants on the planet (Barkworth, et al., 2003). In the U.S., it occurs in every state except Alaska, and in California it has been collected in 34 of the state’s 58 counties. Common reed is most commonly found on wet, muddy, or flooded ground around ponds, marshes, lakes, springs, and irrigation ditches. It occurs in freshwater, brackish and saline conditions. In California, common reed is usually associated with freshwater and alkali wetlands, but it is also found in such upland habitats as creosote bush scrub, yellow pine forest, foothill woodland, chaparral, valley grassland at elevations from sea level to 1600 m/5250 ft. Common reed has a remarkably wide range of climatic tolerances, growing in climates ranging from semiarid to arid desert, sub-humid to humid continental, and subtropical, and in regions where the average winter temperatures are as low as -39 °C/-39 °F or where the average summer temperatures are as high as 46 °C/115 °F.

A member of the grass family (Poaceae), common reed belongs to the Panicoideae subfamily and the Arundineae tribe. The nomenclature for Phragmites australis has undergone many revisions. In fact, the species has some 130 synonyms, including one placing it in the same genus as that bane of western riparian systems giant reed (Arundo donax). Also known by its Spanish name carrizo, common reed is an erect perennial grass  growing 2-5 m/6-15 ft tall. The stout, hollow and leafy stems range in diameter from 0.5-1 cm/0.2-0.4 in. and remain standing year-round. The simple, entire leaves are flat, 10-60 cm/4-20 in long and 1-6 cm/0.4-2 in wide. Leaves develop on only one side of the stem. The flowers of common reed form on many-branched panicles at the terminal end of the stems. The easily recognizable plume-like inflorescences are 15-50 cm/6-20 in long, and in California appear from July through November. Common reed produces dense stands, spreading aggressively in suitable sites by seed as well as by underground stolons and rhizomes. Although individual stems live for about eight years, clones are long-lived and have been reported to persist as long as 1,000 years (Rudescu, et al., 1965, cited in Swearingen and Saltonstall, 2010).

There are three separate lineages of common reed in North America (Saltonstall, 2002; see Figure 1). The endemic subspecies (Phragmites australis subsp. americanus) was historically widespread throughout Canada and most of the U.S. except for the Southeast. Based on preserved remains found in the American Southwest, common reed has been present at least for the past 40,000 years, and in coastal habitats preserved rhizomes have been found that are 3,000-4,000 years old (Swearingen and Saltonstall, 2010). This tells us, of course, that common reed was present in North America long before European colonization.

The the so-called the ‘Gulf Coast’ lineage (P.a. subsp. berlandieri) occurs across the southern U.S. from California to Florida, along the Gulf Coast of Mexico, in South America, and on the Southern Pacific Islands; it is of uncertain heritage and may or may not be indigenous.

The third lineage (P.a. subsp. australis) comes from Europe. It is thought to have been introduced to North America in the late 1700s or early 1800s when seed and/or rhizome sections were carried to Atlantic ports in the ballast of ships. It first became established along the eastern seaboard then spread westward. Over the course of the 20th century, infestations became particularly noticeable around the Great Lakes and Atlantic states. Because the native and non-native taxa are so similar, the spread of the introduced subspecies went unnoticed (Gucker, 2008). Common reed produces copious amounts of seed which are transported by wind, water, and humans. Sections of rhizomes and stolons are transported by water and humans. In the eastern U.S., the native lineage of common reed has been largely replaced by the invasive lineage, although it persists in scattered locations throughout its historic range (Swearingen and Saltonstall, 2010).

This latter lineage is the one causing all the trouble in North America. So much so, for example, that it is considered that Canada’s worst invasive plant. Like giant reed, common reed spreads rapidly and aggressively, forming dense stands that exclude native plants and wildlife and turning once biologically diverse wetlands into monocultures. Once established, common reed can alter wetland ecosystems by disrupting wetland hydrology, increasing fire potential, and reducing wetland wildlife habitat.

Based on genetic analysis, both the native and non-native lineages are present in California and may overlap (Saltonstall, 2002; see Figure 2). It is unclear if it was historically present in all regions of the state. Although sometimes problematic in California, due to the uncertainty of which stands represent the native genotype, common reed has not been assigned any status as an invasive species by the California Invasive Plant Council (Cal-IPC). Scientists with Cal-IPC have not been able to develop an invasiveness score for the species and mapping of native strains has not been possible.

In theory, the native and non-native lineages of common reed can be distinguished by several morphological features. For a detailed discussion of the distinguishing traits, see (Swearingen and Saltonstall, 2010). I have never tried to key out common reed, but based on a review of the key and its use of overlapping characteristics, distinguishing the native from the non-native lineages may be an unrewarding endeavor.

In San Francisco, common reed (under its synonym P. communis) was included in the San Francisco flora (Howell, et al., 1958), based on a record from 1880. The authors noted that it would be expected elsewhere in marshy places in the southern and eastern parts of the city. However, there are no vouchers for the species from San Francisco listed in the Consortium of California Herbaria. Until starting this article, I had assumed that the only patch of common reed left in San Francisco was in on the east side of Brotherhood Way. Jake Sigg informed me that it also once occurred in an impoundment at the south end of Lake Merced and that it was very likely the native subspecies, as noted by Peter Rubtzoff himself. But Randy Zebell with the City’s Natural Areas Program has reported that common reed is no longer present at either site. This means, sadly, that yet another taxon has become extirpated from San Francisco.

Due to its limited occurrence in San Francisco and based on the assumption that ours is indeed the native subspecies, common reed was been included on our chapter’s list of locally significant species. Using the criteria we developed, it is currently rated as an A-2 species, requiring that any potential project impacts be evaluated pursuant to the California Environmentally Quality Act (CEQA). Now that we suspect that common reed has been extirpated, it will be elevated to a rating of A-1. I hope all of you native plant enthusiasts out there will keep common reed on your radar. Let me know if it turns up. 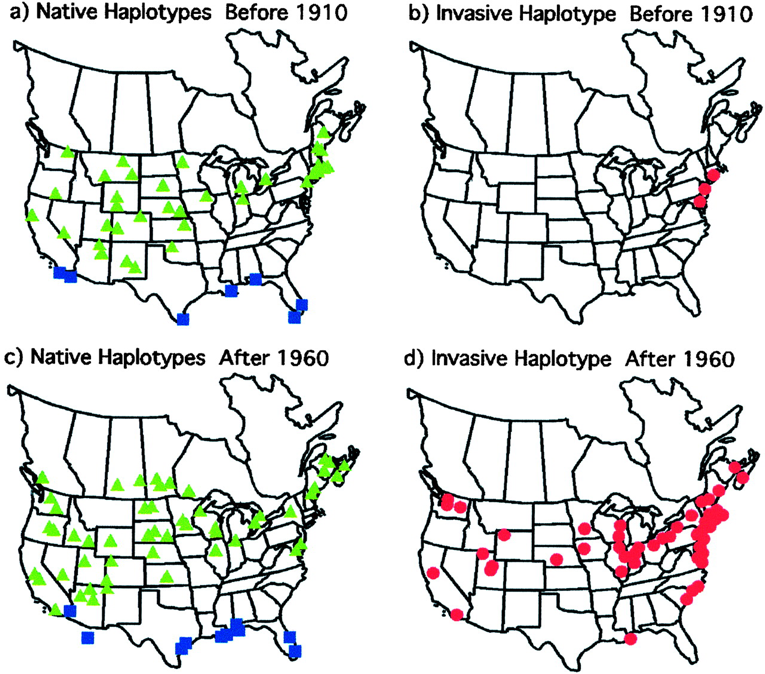 Figure 2. Distribution of Phragmites australis lineages and hybrids in the southwestern United States 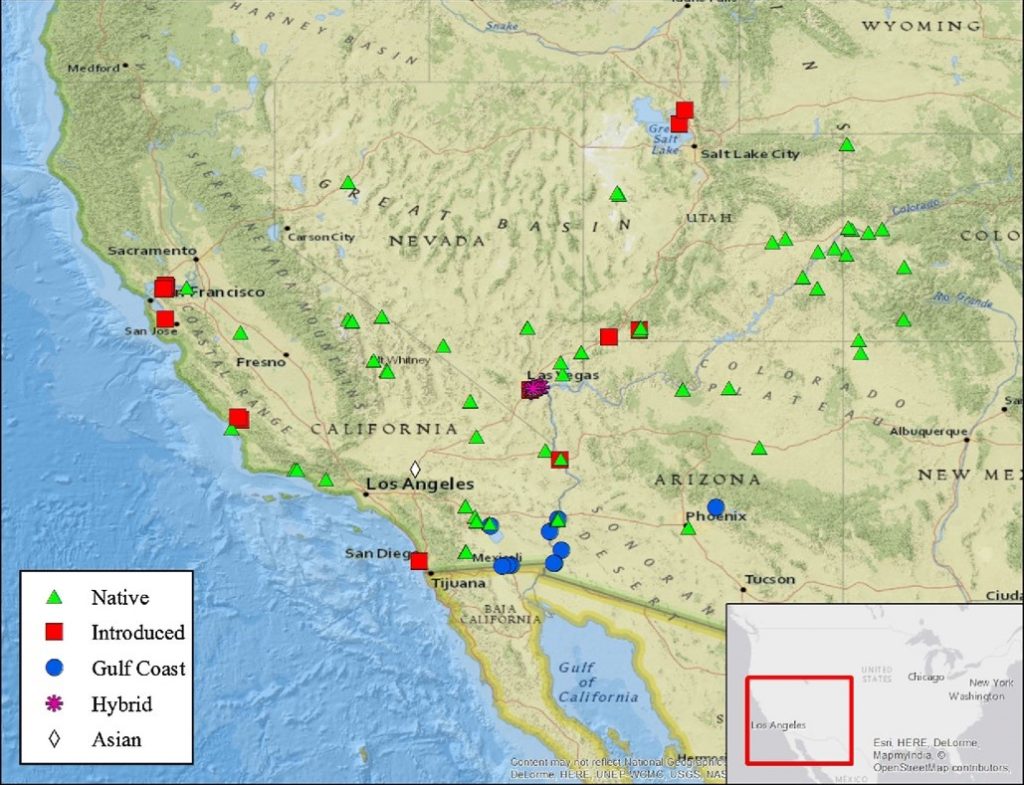 Saltonstall, K. 2002. Cryptic invasion by a non-native genotype of the common reed, Phragmites australis, into North America. Proceedings of the National Academy of Sciences Feb, 99 (4) 2445-2449. Available online at http://www.pnas.org/content/99/4/2445