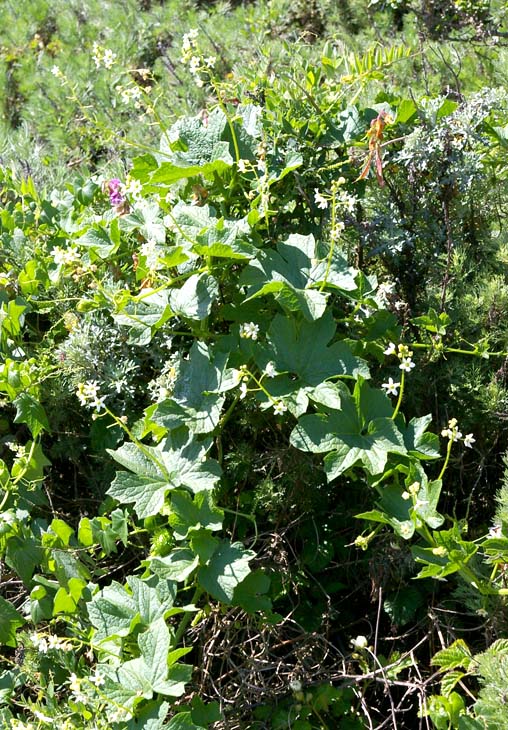 If you’re surprised to learn that California is host to native species of cucumbers, you’re probably in good company. The group that brings us the pickle, squash, gourd, pumpkin, watermelon, cantaloupe and even that essential bath accessory, the loofah, hardly seems like something we’d encounter in our fair state. But then, if you’re remotely familiar with the flora of California, you’re just as likely to think, “why not?… anything is possible here”, with our melange of floras from three geologic eras.

The gourd or cucumber family (Cucurbitaceae) is indeed somewhat anomalous considering our Mediterranean climate and arid soils. After all, this family of some 100 genera and 700 species of mostly climbing vines seems more suited to tropical climes. In fact, it is particularly well represented in the rain forests of South America and the woodlands, brushlands and grasslands of Africa. But the family has expanded from the rainforests to the moist and moderately dry tropics and into semi-deserts and deserts of North and South America, Africa and even Australasia.

Members of the gourd family are typically climbing plants with palmate, alternate leaves, spiraling tendrils, inferior ovaries and symmetrical, five-petaled unisexual (monoecious) flowers. Most are perennial herbs with a swollen tuberous rootstock (more on that later). The fruit, with which you are undoubtedly familiar, is classified as a berry known as a pepo, which can be fleshy, leathery, or a dry capsule, typically with numerous flattened seeds.

Still doesn’t sound like anything that’d be indigenous here? Well, there aren’t many species native to California, but we do have nine species in three genera including desert star-vine (Brandegia [1 species]), gourd/field pumpkin/squash (Cucurbita [3 species]) and manroot (Marah [5 species]). Five of the seven species of Marah occur naturally in California; all are restricted to Western North America. In California, the most widespread of these, and the one most commonly encountered in our chapter area, is California manroot (M. fabacea); it has been collected from 44 of California’s 58 counties. Although more widespread outside of California’s borders, coast manroot (M. oregana), has been collected from only 17 counties. The remaining species have narrower distributions; taw manroot (M. watsonii; 16 counties), chilcothe (M. macrocarpa; 12 counties), and Sierra manroot (M. horrida; 8 counties).

You’ll be happy to learn that the subject of this column did not undergo any radical nomenclatural changes in the second edition of The Jepson Manual (TJM2; Baldwin, et al. 2012), other than a minor grammatical adjustment to the specific epithet from oreganus to oregana, with comparable changes made to two other species, M. horrida and M. fabacea (the genus Marah should be regarded as feminine because it is probably derived from Hebrew and not Latin, but you knew that!) The genus was originally named Echinocystis by John Torrey (1796-1873) and Asa Gray (1810-1888), where it remained through the seventh printing of A Manual of Flowering Plants of California in 1970 (Jepson 1925). This name, amusingly enough is derived from the Greek words echinos (hedge-hog) and kustia (bladder), in reference to the spiny fruits.

With the publication of A California Flora and Supplement (Munz and Keck 1968), the genus was reassigned to Marah, a name first coined by Albert Kellogg (1813-1887), who had a fondness for Biblical references. He noted that “The significance of the name we have chosen would be better understood by perusing Exodus xv: 22-26”, with the following passage, as Moses led the Hebrews through the wilderness: “When they came to Marah, they could not drink the water because it was bitter. That is why it was called Marah [Bitterness]” (The Jepson Online Interchange; available at http://ucjeps.berkeley.edu/interchange/).

You’re no doubt wondering about the common name “manroot”. Also known as big root and old man-in-the-ground, the name refers to the large irregularly shaped tuber, with swollen lobes and arm-like extensions, reaching several feet in diameter and weighing as much as 100 pounds. Although seemingly of value as a potential starchy food source, the tubers have no food value. They do, however, contain a soapy substance like that found in soap plant (Chlorogalum sp.), both of which were used by indigenous peoples as a hand soap and, when crushed and floated on stream pools, to stupefy fish.

The vining manroots are most notable for the spiny fruits (those “hedgehog bladders”) that hang on the lush, green vines sprawling over whatever shrub or tree they can reach. Soft when green, as the fruits dry their skin and spines harden into something that looks like medieval weaponry. Distinguishing coast manroot from the more common California manroot can be somewhat challenging, as some of the traits used are relatively “plastic”, meaning they can vary widely based on environmental conditions. All of the contemporary keys for the genus have coast manroot as being distinguished by its elliptical fruit, tapered to a beak, often less densely covered with prickles. Leaf shape and the degree of dissection between the lobes are of little use in distinguishing the two species. According to Kipp McMichael, editor of our chapter’s newsletter and chapter webmaster, the thickened disk-like seeds of coast manroot are a pretty sure way to tell it apart from California manroot, with its bullet-shaped seeds. Kipp also adds that the fruits build up pressure as the seeds ripen, spontaneously rupturing and ejecting the large seeds. (Marah is Kipp’s favorite native plant, and he has created a website dedicated to the genus: www.anexaminedlife.net/manroot.) Both species flower in the spring, from March through April or May.

Coast manroot is typically found on wooded canyon sides and borders of grasslands and brushlands, from sea level to 1800 meters (5900 feet) in elevation. It is mostly found near the coast from Santa Clara County to the Oregon border. Coast manroot is known from all nine Bay Area counties. On the San Francisco Peninsula, it is plentiful on both San Bruno Mountain and Montara Mountain, and on the eastern slopes of the Santa Cruz Mountains from Crystal Springs Reservoir southward to Saratoga Summit. In San Francisco, it was recorded historically from Visitacion Valley and the hills behind Mission Dolores (Howell, et al. 1958). Currently, our chapter’s records show coast manroot occurring in the City as a single plant at McLaren Park a few plants at Lake Merced, and possibly at Glen Canyon. It’s evident that a concerted effort to re-evaluate the occurrence of coast manroot in the City’s 36 natural areas is warranted.

Coast manroot is not federally or State-listed as endangered nor does it appear on any of the CNPS’ rare plant lists. And although San Francisco is near the species’ southern limits, its presence here is not particularly unusual. However, given its rarity in our chapter area, it is being considered for inclusion on our list of locally significant plant species. So, who wants to undertake a careful survey of the manroots of San Francisco? I’d love to hear about it.